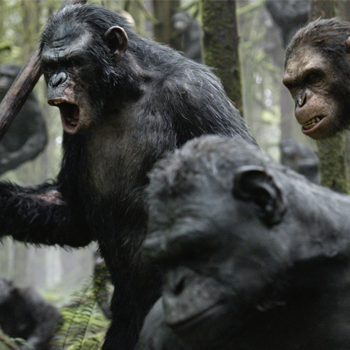 Buoyed by a largely empty new-release schedule and overwhelmingly positive reviews, Dawn of The Planet of The Apes is looking to end the weekend with a projected gross as high as $74 million - not bad for a movie whose top-billed star is a CGI chimpanzee created through motion capture.

The only other new feature of note was the limited release of Richard Linklater's independent feature Boyhood, a drama filmed in pieces over a period of 12 years in order to accurately simulate the growth and aging of it's main characters. The film had an impressive per-screen U.S. average of around $64,000.

Analysts are watching next week with interest, as a large number of mid-level studio features (including The Purge: Anarchy, Disney's Planes: Fire & Rescue and Sex Tape) are crowding into the end of July in hopes of beating an unusually blockbuster-heavy last leg of Summer, with August expected to be dominated by a combination of Hercules, Guardians of The Galaxy the Teenage Mutant Ninja Turtles reboot and Expendables 3; along with "dark horse" entries like Lucy and Sin City: A Dame to Kill For.

Related to:
bob chipman, box-office, dawn of the planet of the apes, moviebob, movies and tv
0
Tweet