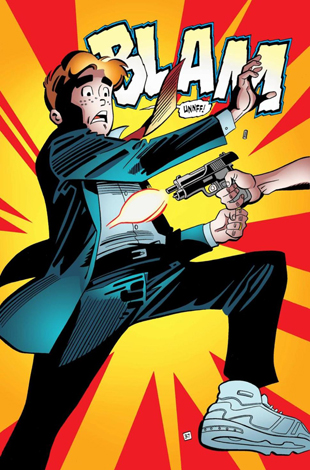 Are you sufficiently shocked into buying the penultimate issue of Life With Archie?

As circulation-generating stunts go, this one is pretty ballsy. We've known since April that Archie comics plans to end the revival of Life With Archie with the death of the main character. And now we know how. It was revealed late last week that Archie Andrews will die in issue #36, taking a bullet intended for Kevin Keller, Archie Comics' first openly gay character.

During its original run from 1958 to 1991, Life With Archie was an anthology series of sorts, featuring the Archie gang in various adventures ranging from amateur crime-fighting to treasure hunting, with occasional forays into alternate universes where the kids were super heroes or secret agents. The series was revived in 2010, this time with continuing from the five part parallel storyline Archie Marries Veronica/Archie Marries Betty series, in which, well, you can guess. This version of Life With Archie often deals with real world sociopolitical issues, and focuses on the adult incarnations of the Archie gang, and features two separate storylines branching from both of his possible marriages.

In the revived series, Kevin Keller is a military vet and politician who becomes an advocate for gun control after his husband is involved in a shooting. While the publisher hasn't revealed the identity of the shooter nor whether or not Kevin's political views will play into the story, it is confirmed that the shooter is "a stalker," and that Archie will die the same way in both the Betty and Veronica storylines. His death(s) will occur in the second-to last issue, with the final issue devoted to the aftermath.

"The way in which Archie dies is everything that you would expect of Archie," Archie Comics publisher and co-CEO Jon Goldwater said in a press statement. "He dies heroically. He dies selflessly. He dies in the manner that epitomizes not only the best of Riverdale but the best of all of us. It's what Archie has come to represent over the past almost 75 years."

Issue #36 will be released on July 23. We'll soon find out whether or not the story is any good, but until then, let's pay early tribute to Archie's sacrifice with the help of our good friend, Jon Bon Jovi: