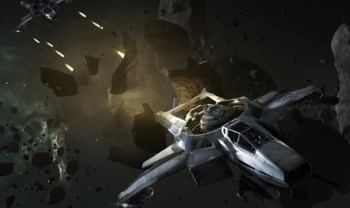 Star Citizen has raised a butt ton of cash through crowdfunding. In fact, as of the last count, the game's fundraising efforts had accumulated more than $48 million or, if you want a more impressive sounding number, 4.8 trillion pennies. With all that money in mind, we might understand some gamers feeling a tad anxious about the end results. Will the game be good? Will it be worth the cash I invested in it when it was just an idea? Will I finally get the good multiplayer Wing Commander that I've always wanted? According to its developers, Star Citizen won't just be good, it'll be so damn good that a console version will be out of the question.

"Consoles couldn't possibly handle a game like Star Citizen," said Cloud Imperium's Eric Peterson. "Gaming PCs right now are formidable, with powerful CPUs and GPUs. Even next-generation consoles cannot be compared, their internal components are already older than what I could add to a gaming PC today." Star Citizen, will aim to exploit all the technical advantages that PCs have to offer. "We wanted to create a game that showed everyone the capabilities of PC, for those that have fun building configurations with double GPUs and liquid cooling, who no doubt were frustrated to not be able to fully use the potential of their machines."

Peterson's sentiments have been echoed in the past by Star Citizen's creator Chris Roberts who, at one point, said that the game "will NEVER be dumbed down for a lesser platform." In other words, between both Roberts and Peterson's statements, it's looking like PS4 and Xbox One fans can bid farewell to any hopes they may have been harboring for future ports. If it's any conciliation, the team behind Elite: Dangerous (aka: that other cool in-the-works space flight sim) has just recently said that it would have to be "stupid" to not bring its game to consoles. So while you may never know the joy of playing Star Citizen on PS4, there's still a chance you'll be setting off into the stars with your Dual Shock (or Xbox controller) in hand.