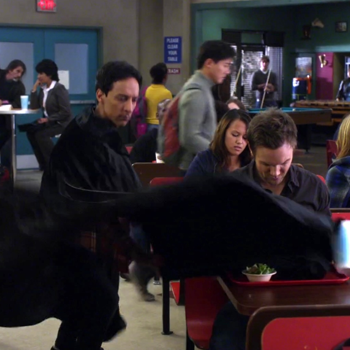 "It didn't just make sense for us to have another season of it at that level of audience," says NBC chairman.

Fans are elated that Community's "six seasons and a movie" goal is that much closer to fulfillment after Yahoo confirmed they were renewing the TV show for a sixth season. This was of course after fans were distraught that NBC canceled the show.

Community's history on NBC has been a bit rocky. At first there were creative differences between the show creator Dan Harmon and actor Chevy Chase, which was then followed by Chase's departure. Harmon also left the show and season four was delayed. There was uneasiness for sometime if NBC would even be renewing Community for season five. Conclusively, given the ratings NBC witnessed for the latest season, the company felt it wasn't a right business move to continue the show on their network.

NBC Entertainment chairman Bob Greenblatt provides a bit more insight on that decision, "That sixth season thing was created by them [the fans]--I'm surprised they didn't say '10 seasons and a movie.'" He goes on to say, "And [the mantra started] before my time [at NBC]. It didn't just make sense for us to have another season of it at that level of audience."

He also doesn't seem to have high hopes for the show's success on Yahoo! Screen, "I don't know if we'll ever know how many will watch it on on Yahoo, I guess we will, I'm curious if they'll have a bigger audience with it than we did."

Here's some Community trivia: The "six seasons and a movie" mantra began as a joke within the show, where Jeff teases Abed for liking the superhero TV series The Cape. After Abed knocks Jeff's food off the table with his elaborate cape moves, Jeff screams at him the show won't last more than three weeks. Abed boldly replies, "Six seasons and a movie!" and disappears into the darkness (of the hallways). The Cape only lasted about 8 weeks.