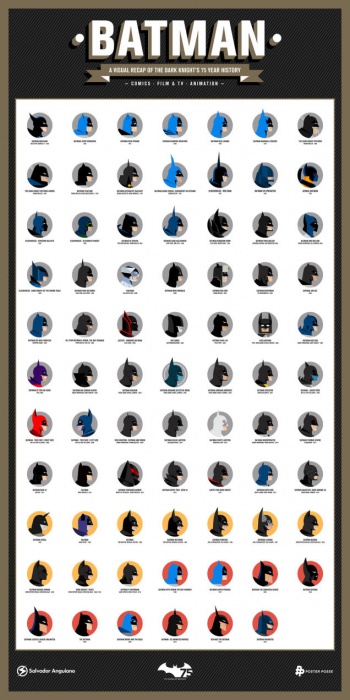 From Batman's first appearance to Batman: The Animated Series to LEGO Batman, check out how the Dark Knight's cowl has evolved in 75 years.

Regardless if it's in the comics, animation or movies, Batman always seemed to look different depending on the artist depicting him. Well, now you can check out how the Dark Knight's cowl has looked over the years by this poster by artist Salvador Anguiano. 75 of Batman's cowls are showcased in the rather big poster, which illustrated for Poster Posse's Batman 75th Year Anniversary poster extravaganza. There's Neal Adam's Batman, Batman Beyond, Batman: The Animated Series, LEGO Batman and lots more.

Don't forget that you can read which cowl in the image corresponds to which version of the Batman. If the text is too small for you, try and looking at it via invades and "improves" famous films or take a look at how Fox's upcoming Batman-themed show, Gotham, reinterprets Bruce Wayne.

Which cowl from which Batman is your favorite? Personally, I think the Batman: The Animated Series one works best as I think having his horns too long was a bit weird since it'd mean skulking in the shadows would be harder than it needed to be. But it being too short would mean people wouldn't even be able to see that he had 'em unless they were really, really close.