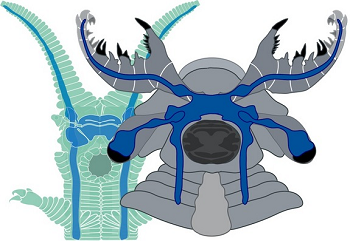 A remnant of Earth's Cambrian Period has been unearthed in almost pristine condition.

A 520-million-year-old sea monster that prowled the oceans during the Cambrian Period has been unearthed in China. Dubbed Lyrarapax unguispinus, this new species was one of the first predators of its time and sported compound eyes, body armor, and two spiked claws for capturing and wounding potential prey. The remains found by researchers were about 6 inches (15 centimeters) long.

Most life before the Cambrian Period resembled simple algae and immobile jellyfish-like life forms. During the Cambrian explosion (which lasted between 543 million and 493 million years ago) a period of rapid evolution occurred and biodiversity exploded. The result was swimming sea creatures reminiscent of crustaceans- complete with compound eyes, jointed legs and hard exoskeletons. The period also gave rise to shrimp-like anomalocaridids that were equipped with bladed body armor and a cone-shaped mouth made of concentric plates. They were the top predators of the Cambrian seas, and could grow up to 6 feet long.

Peiyun Cong, a researcher at Yunnan University in China, said that most anomalocaridid specimens paleontologists have found thus far were poorly preserved and difficult to incorporate specifically into the tree of life. In the last several years, researchers unearthed three immaculately preserved specimens of the new species of Lyrarapax unguispinus in fossil sediments located in China. The sediments had frozen these creatures in a way that preserved the entire nervous system, sections of the gut and some muscles- making them visible.

Because its brain lacks some characteristic features, the creature likely shared more similarities with a group known as velvet worms. It is also possible the animal could have grown to be much bigger. Cong said, "The three known specimens may represent immature stages of the animal, so it might be larger."

Cold blooded predator or cushy crustacean? Let us know in the comments!