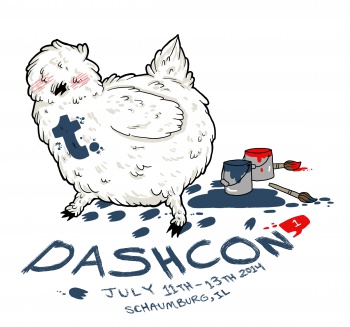 "Should we have been more prepared? Absolutely."

The DashCon organizers have released an official statement about the events that led to the fandom convention being described as a "complete disaster". The statement cites "mismanaged communication", contract misinformation and clerical errors for the convention's troubles. The official statement comments on all of the major concerns raised about the convention, ranging from the emergency fundraising drive to pay for outstanding costs, the cancellation of the Welcome To Night Vale podcast appearance, missing hotel rooms for guests of the convention, and allegations that minors were being allowed into 18+ panels. The organizers take responsibility for some of the problems, provide explanations for others, and also offer apologies to their attendees, guests, and the hotel that hosted the event. Two unnamed members of DashCon's staff have been removed from the company in the wake of the convention's missteps.

The convention, which aspired to be "the largest gathering of Tumblr users to date", was held at the Renaissance Schaumburg hotel in Illinois from July 11 through 13. On Friday, July 11, the event organizers scrambled to raise $17,000 to cover outstanding costs for the hotel. "Only about $7,000 was money still due on the venue itself, as $10,000+ was for 'at event services,' such as electricity, which wasn't even quoted to us until a day or two prior to Thursday night's early registration," says Megan Eli, DashCon owner, in the official statement. According to Eli, the terms governing when payment was expected in the contract with the hotel were not correct, and the staff member who handled the contract has been removed. The official statement includes DashCon's accounting records for payments made to the hotel, showing $21,000 paid before the convention and $22,237.45 paid between July 11 and July 14. Cash donations from attendees amounted to just over $11,770, while donations raised on PayPal were disbursed to the hotel in two payments of $3,000 each, due to daily spending limits on the PayPal Debit Card used to access the funds. Attendees who wish to have their cash or PayPal donations refunded have been instructed to contact the convention by 11:59 pm Eastern on Saturday, July 19. DashCon has provided details about how to request a refund.

After speaking to our legal counsel, we have been advised that we are unable to provide refunds on these seats. This decision was based on several of DashCon's Rules and Policies, which can be found here. The pertinent rules are quoted below:

DashCon has been instructed that refunding the reserved seats in direct opposition with our rules would call into question all of our rules and policies. We are both saddened by and understanding of this stance. Potentially losing the enforcement of all of our rules and policies is not something we can risk now or at any time in the future. For anyone who has questions regarding this decision, we will [upon request] direct you to our legal counsel.

The statement also offers an explanation of the now-infamous tiny ball pit. "Photos on the website were not representative of products received, and the company has been contacted with photographic evidence of the quality and size of products provided to us," says Eli. When the Welcome to Night Vale event was cancelled, attendees were offered entry into a raffle and "an extra hour with the ball pit" as compensation. According to Eli, when that offer was posted, "[T]he Con Head who posted it had never actually seen the product we received, and those of us who had were unavailable to provide input at the time."

Issues with rooms for guests of the convention are explained as a clerical error, and reports that minors got into 18+ panels is dismissed, with Eli stating that all attendees had their identification checked before entering those panels, due to problems with the 'Over 18' bracelets supplied by the convention. The bracelets were not attached tightly enough, or were attached to badges, completely defeating their purpose. Eli dismisses rumors that the Renaissance Schaumburg was unhappy with the convention attendees and that they "didn't like the 'type of clientele'" brought in by the event, and apologizes for passing on the rumors. "When two of the Con Heads were told by the third that such a thing had been said or otherwise insinuated, it wasn't wholly unbelievable - as it's happened to so many other events in the past - and, in our state of panic, we believed what we were told, therein passing it along to our attendees."

While DashCon has owned up to some of its mistakes, the convention clearly suffered from mismanagement, miscommunication, and poor planning. The next DashCon is already being planned, to be held June 19-20, 2015 at the Indianapolis Convention Centre.