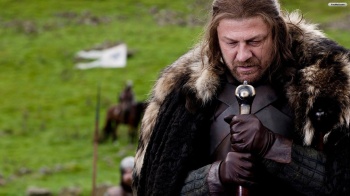 Sean Bean, who played Ned Stark in the first season of Game of Thrones, expresses that he wants to return to the show and says he has "unfinished business that needs to be resolved." Read on to see how this could be a possibility (major spoilers inbound!).

Could Ned Stark be making a return to Westeros? If Sean Bean, the actor who portrays Stark in the hit HBO TV series, has his way, then yes, he very much would like to. Now, if you've watched Game of Thrones' first season, then you know how hard that would be to do since Ned gets offed in a rather unexpected and spectacular way. However, there's still a chance of Bean reprising his role in the series, and one he's comfortable in doing since the actor says he has "unfinished business that needs to be resolved there."

Now, before you read on, I must warn you that the info discussed below, as well as Bean's answers will involve heavy spoilers from the books. So if you haven't read A Dance with Dragons, I suggest turning back right now.

Still here? Good. In an interview with Vulture, Bean was asked that since he's close to wrapping up his latest film, he might have a window in his schedule to appear in Game of Thrones if the showrunners needed him back for flashbacks in season five. Bean excitedly (yes, he was described as excited) replied with, "Are they? Really?" before it was described how his role would play out. Once again, if you don't want any part of the books spoiled for you, I suggest turning back now. For the sake of clarity, we've included both the question and answer for easy reference.

I could be wrong, but I think they might show flashbacks via Bran's connection to the heart trees.

Bean: But it's a good theory! And that should happen, shouldn't it? I've definitely got some unfinished business that needs to be resolved there. I'm obviously not Jon Snow's dad. And you need that to be revealed at some point, don't you? So Bran would kind of be the one having the flashback, and he would see Ned praying, right? And revealing those things? You never know what those guys are going to do with that. It's got to be something special. But I'm into that. I certainly would be into that. Print that! Give them a nudge. [Laughs.] Hopefully I'll get a call soon.

If you've been paying attention, which is easier to do when you're reading the book series than watching it, then you'd know that George R.R. Martin has left little hints here and there that suggests that Ned really isn't Snow's dad. If you want more info regarding this famous fan theory, then I suggest using Google to find out what this points to and how it could change the Game of Thrones landscape.

Should Ned come back to the show? Even in a flashback scene? Personally, I'm all for it given Bean's an excellent actor. But with HBO not afraid to recast roles in Game of Thrones, even that isn't a done deal.