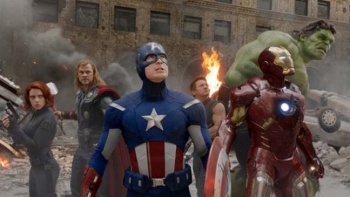 It appears Whedon's cutting assessment of the original script helped him land the job directing the film.

While Marvel's The Avengers was both a critical and financial success, it started out in terrible shape. Apparently set to shoot with an absolute dog of a script written by X-Men: The Last Stand scribe Zak Penn, one of director Joss Whedon's first orders of business was to ditch that script and rewrite the whole thing himself. At least, that is, according to Amy Pascale's upcoming book, Joss Whedon: The Biography.

"I don't think you have anything...." Whedon reportedly told Marvel Studios boss Kevin Feige. "You need to pretend this draft never happened." Whedon, who wasn't even signed on to direct yet, went home, wrote a five-page draft outlining what his plans were for the movie, and even came up with the tagline: "The Avengers: Some Assembly Required," an obvious reference to the "Avengers Assemble" slogan from the comic books.

Whatever Whedon showed Feige clearly did the trick: Marvel quickly signed him to write the script and direct the film. The only stipulation the studio had was that Whedon had to include The Avengers, Thor's nemesis Loki, a battle among superheros in the middle, a full-fledged brawl against the villains to cap of the movie, and that the film meet its targeted May 2012 release date.

Like Feige, the actors liked the script too. "[The script] was funny and still tongue-in-cheek and really got the tone, the Tony Stark tone of the Marvel universe, and still furthered and explored each one of those characters and those relationships," said Clark Gregg, who portrays Agent Phil Coulson in the Marvel-verse. "I found out later from other people involved that had the same reaction-like, oh, wow. Oh, wow. Everybody gets to play. Everybody gets to play, and it's going to be better than anything we reasonably hoped for."

As for Penn, who still received a "story by" credit in the finished film, isn't too sore over having had his work thrown out. "We could have collaborated more, but that was not his choice," Penn told GQ. "He wanted to do it his way, and I respect that. I mean, it's not like on the 'Hulk,' where I got replaced by the lead actor...That was an unusual one. This was more normal." Penn refers here to Ed Norton, whose attempts to assert a high degree of control over The Incredibly Hulk reportedly contributed to Marvel's decision to replace him with Mark Ruffalo.

Meanwhile, just this weekend, Whedon practically confirmed that JARVIS and The Vision are connected in Avengers: Age of Ultron. Could Whedon strike gold again in the sequel or will it be harder for him this time since the expectation is much higher compared to the first Avengers film?