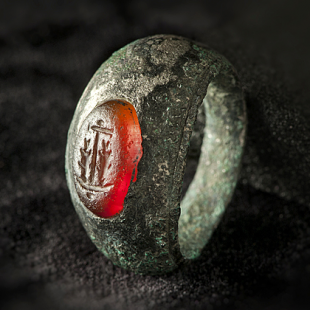 A group of archaeologists have discovered a third century Roman ring in Britain adorned with rare Christian markings.

One of my (and most every nerd's) lifelong dreams has been to find a ring of power. It's not like J.R.R. Tolkien made them look all that appealing or anything, but when finding one is the first step to embarking on an unfathomable adventure, you can perhaps understand why a youth like myself might be interested in digging a hole in my backyard and pulling out a shiny magic band of metal.

Sadly, I never found one ring to rule them all, but if a recent archaeological dig is any indicator, I might have just been looking in the wrong place. For instance, a group of archaeologists recently discovered a rare ring while exploring the ruins of an Roman bath house in north east Britain. While the bath house itself was "exceptionally" well preserved and interesting in its own right, the ring caught the attention of the excavation team thanks to an unexpected combination of markings and features that could point to third century origins for Christianity in the region.

"The intaglio shows two fish hanging from an anchor. This has clear Christian connotations," said Dr. David Petts. "It is found widely elsewhere in the Roman Empire, but this is only the second example from Britain; the other example coming from the colonia at York."

Current common belief is that Christianity became more prominent in early Britain following the 306 AD ascension of Emperor Constantine who was the first Roman ruler to allow the free practice of the religion within the confines of the empire. If the assumptions about this ring are true, it would predate that era substantially. Now granted, that's not quite the same as stumbling onto the Sauron's ring of power, but as far as discoveries go, it's pretty far from shabby.