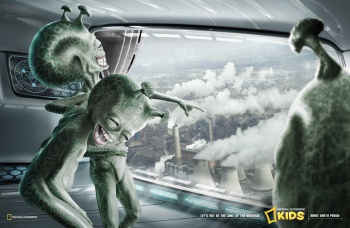 Researchers have devised a new method of scanning our universe for alien life: looking for pollution.

Theorists at the Harvard-Smithsonian Center for Astrophysics believe that the upcoming James Webb Space Telescope should be able to detect certain pollutants in alien atmospheres, giving us another way of searching for alien civilizations. Two types of chlorofluorocarbons, or CFCs, should be detectable by the telescope if atmospheric levels are 10 times those of Earth. Commonly known as Freon, CFCs are those aerosol compounds that were phased out under the Montreal Protocol because they deplete the ozone layer.

"People often refer to ETs as 'little green men,' but the ETs detectable by this method should not be labeled 'green' since they are environmentally unfriendly," says Avi Loeb, co-author of a paper on the research.

The telescope is only powerful enough to detect the CFCs on a planet orbiting a white dwarf star. In the case of a Sun-like star, the atmospheric signal wouldn't be strong enough to detect by the James Webb Space Telescope.

Given some pollutants can remain in our atmosphere for 50,000 years while others last only 10 years, detecting the kinds of pollution can even provide insight into the nature of an alien civilization. For instance, detecting the long-lived pollutants but not the short-lived ones has some obvious implications.

"In that case, we could speculate that the aliens wised up and cleaned up their act. Or in a darker scenario, it would serve as a warning sign of the dangers of not being good stewards of our own planet," says Loeb.

We've already considered the odds of finding intelligent life in our galaxy and addressed the apparent paradox when considering the vastness of the universe in contrast to the lack of evidence of life. If we were to discover an alien civilization, do you think they would pollute more or less than we do? Would they be little green men, or little grey men?