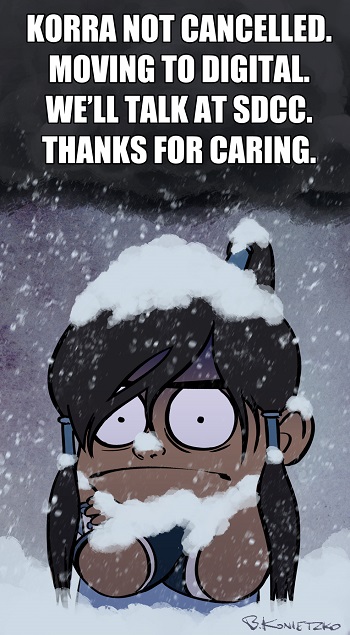 The Legend of Korra isn't over, but Nickelodeon has decided to take the show off the air.

After a single episode this Friday at 8/7c, "The Terror Within", The Legend of Korra will no longer air on Nickelodeon for an unknown period of time. Details are limited now, but Bryan Konietzko, co-creator of Avatar: The Last Airbender and The Legend of Korra, shared the image to the right on his personal tumblr. Fellow co-creator Michael Dante DiMartino stated something similar on his Facebook page. "There is 1 new episode this Friday at 8, then the rest of the season will be available from various sites online," DiMartino says, "We'll let you know when we have more details."

This season has been a mess on the distribution side of things. While fans expected the trailer for Book Three and information regarding the premiere at San Diego Comic Con this week, an accidental leak of a number of episodes led to Nick releasing the trailer early. The season premiered at the end of last month and Nick has not done the series many favors.

The three part premiere was announced just a week before it aired. Without proper advertising or time to build word of mouth, the season premiere only had 1.5 million viewers. Disappointing numbers for a show that pulled in over four million viewers in previous seasons. In the weeks that followed, Nickelodeon aired two episodes a night, quickly burning through the thirteen episode season. With no streaming options available (something Nick advertised?), most viewers had no way to catch up on missed episodes due to the poor broadcasting and advertising plans.

As Konietzko states, we should expect more details this week at SDCC, which we are covering from San Diego. It looks like it was destiny for Korra fans to look to Comic-Con for big news, only now we might be somewhat less optimistic.

The Legend of Korra: Book Three will air what might be its last episode on Nickelodeon this Friday at 8/7c. If you want to read up on what you've missed this past season, check out my reviews/recaps here, here, and here.

A Friday night genre series with a loyal fan following built up from previous works by the creators that is taken off the air after the network fails to advertise it properly or broadcast episodes in a logical manner. Hmm, this sounds familiar...