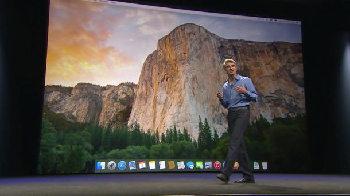 The appeal of the new OS version is centered around connectivity and flexibility when working on a network with multiple devices.

Today, Apple is making its upcoming new computer operating system OS X Yosemite available to the public via beta. The company announced the new software at its annual Worldwide Developers Conference last month- generating excitement with a new feature called "Handoff" that allows users to transfer whatever operation they happen to be engaged in from one Apple device to another. Developers have been experimenting with the OS since June.

For those interested in getting their hands on the software before it hits shelves later this year, they must sign up for Apple's Beta Program and subsequently activate the link sent the next day to your attatched email. That link will allow for you to download the beta. The first one million who sign up will be given access.

As per usual, it is recommended that participants backup any important data before downloading the Yosemite beta on any of their devices- as testing unfinished software could prove to be problematic. The software will come with a built-in feedback assistant app which lets users report bugs and submit their thoughts on their experience with the OS.

Apple has reported a 5.9% increase in revenue since last year, and hopes to keep its popularity going with upcoming software. "We're thrilled with the results, and we're thrilled with where we are going," Apple Chief Executive Tim Cook said in an interview with The Wall Street Journal. "The momentum is really strong."

Do you plan on engaging in the Yosemite Beta? Tell us about your experience in the comments!