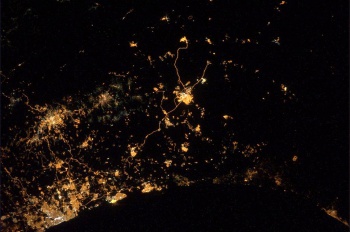 An astronaut in the International Space Station took a photo of Gaza and Israel. Explosions and rocket fire can be seen even from space.

Astronaut Alexander Gerst tweeted a nighttime photo of the war zone in the Gaza-Israel conflict. Amid the snaking street lights coalescing into bright city centers can be seen the flashes of rocket fire and explosions.

"My saddest photo yet," writes Gerst. "From the ISS, we can actually see explosions and rockets flying over Gaza & Israel."

Gerst has been living and working aboard the International Space Station for almost two months and has been regularly tweeting photographs taken in orbit of our planet. Previously featured in his images have been Mt. Etna, the pyramids of Egypt, Utah's Great Salt Lake, and other wondrous sights. His photo of the Gaza-Israel area serves as a grim reminder of the violence humanity brings to the world.

Over 600 people have died in the conflict in the two weeks since Operation Protective Edge began, a quarter of which have been children. Almost 5000 people have been wounded. The Gaza-Israel conflict began in 2006.

Born in Germany, Gerst was selected as an astronaut in 2009 by the European Space Agency. He is scheduled to return to Earth from his first spaceflight in November 2014.