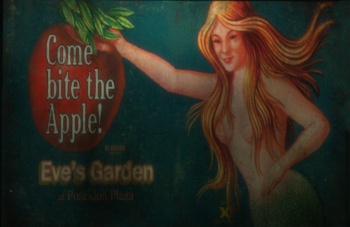 2K's UK Twitter account has Tweeted out an image from the original BioShock with the caption "what could this mean?"

The studio that made the original BioShock and BioShock: Infinite may have closed down, but that isn't stopping 2K from agonizing fans with teasers from the series. 2K's official UK Twitter account just posted the picture you'll see to the right (an in-game advertisement for Eve's Garden, an "exotic dancing venue" from Fort Frolic in the original title), twice, accompanied with the phrases "discuss" and "what could this mean?"

What could this mean, indeed. Some fans quickly gained hope that the long-rumored (and apparently dead-in-the-water) BiosShock PS Vita port may finally be about to get an announcement, while other, more optimistic folks believe a whole new title may be in the works.

Cynics were quick to point out that the image was only Tweeted out of the regional UK 2K account, and not its general account, assuming that whatever comes from this may be limited to the UK.

Last we heard of BioShock, 2K was assuring us that despite Irrational's disbandment, the franchise was not dead. Whether this means new titles, or simply it being used in other projects, is yet to be seen.