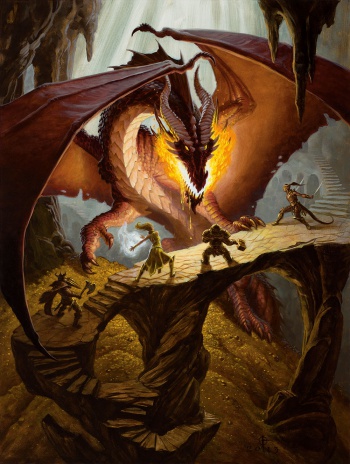 "Including the material brings value in two big ways: it looks a segment of our audience in the eyes and tells them that we see them, and it encourages our other players to consider the spectacular array of characters that they can create in D&D," said co-lead Jeremy Crawford.

Perhaps one of the biggest stories to come out of the impending launch of Dungeons & Dragons latest edition was Wizards of the Coast's very direct acknowledgment of gender diversity within the game rules. In the basic rule set for the game, which were released for free on Wizards website earlier this summer, the entry on "Sex" in the "Personality and Background" section tells players that they "don't need to be confined to binary notions of sex and gender," and even states that the game's chief elven god is seen as both androgynous and hermaphroditic. The rules also, for the first time, explicitly state that a character's sexual orientation is completely up to the player to decide.

In a recent interview with The Mary Sue, Dungeons & Dragons lead designers Jeremy Crawford and Mike Mearls talked at length about their design to encourage that diversity. Said Crawford:

We knew early on that we wanted the new edition to be inclusive: inclusive of beloved material from previous editions, inclusive of different play styles, and inclusive of a varied cast of characters. We also wanted to be welcoming to as many D&D players as possible, to look at the wonderfully diverse group of people who play the game and say, "There's a place for each of you at the game table." ... Including the material brings value in two big ways: it looks a segment of our audience in the eyes and tells them that we see them, and it encourages our other players to consider the spectacular array of characters that they can create in D&D."

The text for the chapter came from Crawford talking with writers and editors at Wizards, who helped tweak the wording, before getting final approval from Mearls, who weighed in with some thoughts of his own:

I think a lot of RPG designers are in the same place that we were, in the sense that they want their games to be inclusive but don't always quite get how to do that ... Any social change takes time. My personal sense is that I've always been much more leery about offending gay and transgender folks by fumbling the issue in an effort to include them. I'm not worried about offending bigots - quite the opposite, in fact. The value lies simply in acknowledgement, and realizing that it's better to put something out there than remain quiet out of a misplaced bout of sensitivity

Mearls also called this flexibility of character design "hugely important" to tabletop RPGs, since they're designed to encourage creativity. The interview focused on a variety of other topics as well, including the art direction for the new edition. Mearls mentioned that the development team - including an art team consisting almost entirely of women - decided early on that they were going "to avoid bare midriffs, cleavage, and other common gaming tropes. We only use those if a specific character would actually dress that way," such as the demonic incubus and his six-pack abs.

For more news on the new edition of Dungeons & Dragons, check out our exclusive look at the table of contents and the Sorcerer class from the upcoming Player's Handbook.