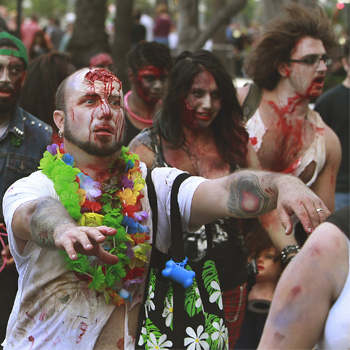 A tongue-in-cheek celebration of pretend gore and safe scares turned real-life-deadly Saturday evening at the San Diego Comic-Con's annual "Zombie Walk," an event where participants march while costumed as the living-dead, when a woman was struck by a car after it was (allegedly) attacked by some marchers.

Details are not 100% clear as police are still looking into the incident at this time. The car, which was occupied by a deaf family, was stopped waiting for the marchers to pass at approximately 5:30pm when, according to the father (who was driving) his children became frightened by the "zombies." He began to move forward - possibly angling for the crowd to let them through - at which point, police say, multiple persons began to beat on the car, smashing its windshield. The car then drove forward to escape (stopping when it reached a nearby police officer) and in the process is said to have struck a 64 year-old woman who was subsequently hospitalized for a possible broken arm.

There are, currently, discrepancies as to whether either the injured woman or all of those attacking the car were marchers or spectators. Police are investigating and will seek video recordings of the incident.