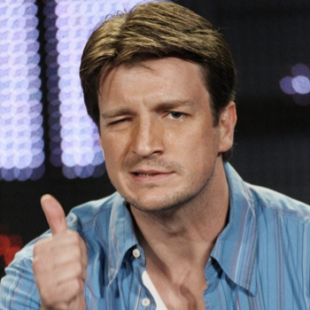 The underwhelming identity of Nathan Fillion's Guardian of the Galaxy role has been confirmed.

Nathan Fillion, at this point, could safely be branded as one of the pillars of modern nerdom. Even with his role in Firefly now long (and depressingly) in the past, he's beloved by most everyone and his inclusion in anything is often treated like an event unto itself. You can perhaps understand then why fans went bonkers when it was revealed that he'd have a cameo in the soon to released Guardians of the Galaxy. Imaginations ran wild with anticipation! What would he play? Who would he be? The answer may be less exciting than some were hoping for.

A recent report from The Nerdist has confirmed that Fillion's role in the film is limited to voicing an inmate who is quickly dispatched by Groot and Rocket Raccoon during the prison sequence recently previewed to Imax audiences. This would fall very much in line with previous statements from director James Gunn who, speaking on Twitter, said that Fillion would have "a very small fun cameo" that he performed "as a favor."

In other words, this is basically a real, honest-to-god cameo and not some veiled revealed of future Marvel movies to come. On the one hand that's a tad disappointing. On the other, it's still pretty cool to think that the Captain was nice enough to take on a bit part to help out his friend. What do you think? Were you hoping for more or did you believe Gunn and company when they said that Fillion wouldn't be receiving a larger role?