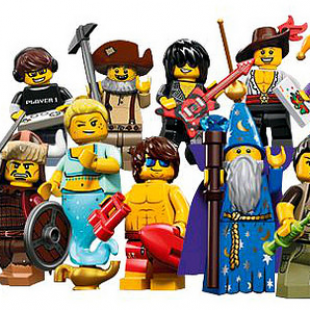 LEGO has unveiled its next collection of minifigures which will include among its ranks a gamer-themed character.

There are a lot of ways to know if you've made it in this world. Maybe you find yourself winning award or being referred to as an expert. Maybe your wallet gets fatter and you house gets bigger. Or, if you're truly lucky, you might find yourself among those elite few who have had the honor to be recreated in the miniature, plastic image of LEGO. It's a prize that only handfuls of people have been able to claim in our lifetime. That said, it's also one that gamers, as a community, can claim to have had at least a small taste of.

This is thanks to LEGO's latest batch of new mini-figures which, according to reports, will include a game themed character. The gamer, as pictured in released art, will feature brown hair, headphones, a classic style game controller and a black t-shirt that reads "Player 1." It's important to note that LEGO has yet to officially brand this as being a "gamer." Granted, we can't think of what else you might call it, but who knows? Maybe LEGO will throw us for a loop and come up with something unique.

Whatever the company decides to call it, we're going to go ahead and count this as a definite win for gamers. We might still fall prey to things like dumb politicians and evil ISPs, but going forward we'll at least be able to rest happy knowing that our culture has been immortalized in the same way as Batman, Han Solo and Homer Simpson. Truly we're rubbing elbows with the greats.

Each LEGO minifigure costs $3.99 each. The gamer minifigure will release in October 2014.