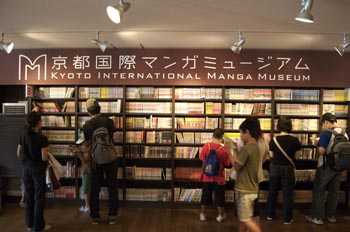 The Japanese government will launch a massive anti-piracy campaign for the anime and manga industry this Friday.

Update: Japan's Ministry of Economy, Trade, and Industry revealed its Manga-Anime Guardians project, which will monitor and remove illegally uploaded copies of anime and manga. The project aims to create an environment where people can enjoy official versions, spur creation, and continue to create new works and cultivate new talent. The METI states online piracy hurts Japan by nearly $20 billion. Over half of US anime and manga fans watch and read pirated works, according to the METI.

Original: This Friday the Japanese government will begin an anti-piracy campaign with 15 anime and manga producers and distributors and enforce legislation from October 2012 directed at illegal file sharing.

Since the legislation, piracy has remained a problem in Japan just as it has worldwide. Anime and manga are one of Japan's cultural exports as they have spread in popularity around the world.

The government and the 15 producers and distributors will begin contacting 580 "overseas pirate sites" demanding they delete copyright infringing content. The sites are located around the world, but many are in China, where much of the anti-piracy campaign will focus. A new site will direct fans to legal copies of affected works, which are available for a few hundred yen (equal to a few US dollars), the NHK noted.

"We want to create a project so that anime fans overseas can enjoy Japanese content legally and without infringement worries while the profits are paid to anime production companies and publishers," the Ministry of Economy, Trade, and Industry stated to the NHK.

Because Japanese anime and manga is a niche market outside of Japan, many people will watch anime and read manga with fan translations before they are licensed and legally distributed in their home country. The Japanese government and partnered foreign distributors will need to address this problem, and anti-piracy laws have done little to fix it so far.