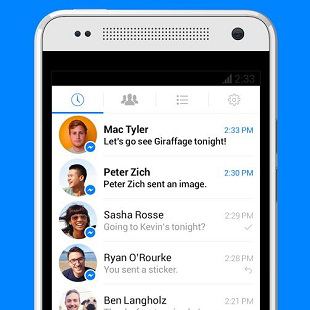 Using Facebook on a mobile device? Messaging will soon be stripped out of the app, will only be available in separate Messenger program.

If you're using the Facebook app on your iOS or Android device, you won't be able to chat/message friends within the application for much longer.

Soon, Facebook will require all of its mobile users who are interested in messaging to install Facebook Messenger (iOS, Android links), a standalone client that handles all messaging communication externally.

I've been using the Messenger app since it launched on Android, but those who have resisted (or were simply indifferent) will now have three choices: Install the app, don't message friends from your phone, or keep the web version of Facebook bookmarked in Chrome or Safari.

The new policy seems to be rolling out in Europe first, with the US to follow in the coming weeks.

So why the strip-out from Facebook? "...we found that having it as a second-class thing inside the Facebook app makes it so there's more friction to replying to messages," said CEO Mark Zuckerberg to TechCrunch, "so we would rather have people be using a more focused experience for that."

Does this move grind your proverbial gears? Or are you already using the Messenger app? Let us know in the comments.