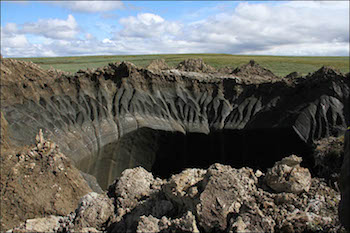 Scientists still have no heading in discerning what has been causing these holes to form.

Two weeks after the original phenomenon occurred, two new enormous holes have been found- one in the Siberian province of Yamal (which translates to "the end of the world") and another that lies due east in the Kransoyark region. Officials and scientists are still unsure as to what caused the event.

The first hole was explored and measured at 195 feet in diameter with a depth of around 300 feet. The second hole inside Yamal has a diameter of 50 feet, and its depth is currently unknown. The third hole in Kransoyark was 13 feet in diameter and is estimated to be around 200 to 325 feet deep. Deputy of the regional parliament Mikhail Lapsui spoke to The Siberian Times in an interview, saying, "I flew by helicopter to inspect this funnel on Saturday, July 19th...[There is] ground outside, as if it was thrown as a result of an underground explosion."

The newly found Yamal hole was witnessed by local residents forming on September 23rd of last year. There are two separate accounts: One claims the ground began to smoke and was followed by a bright flash, while the other indicates that a celestial body fell and crashed into the permafrost. The Kransoyark hole was discovered accidentally by local reindeer herders from the village of Kosok when they almost fell into it.

None of the local geologists, ecologists, or historians have come to an agreement concerning what could have caused these giant holes to form. 'It is not like this is the work of men, but neither does it look like natural formation,' said one account. Theories currently range from meteorites, stray missiles, a man-made prank and aliens- to an explosive cocktail of methane or shale gas suddenly exploding.
Do you think these holes were formed naturally or supernaturally? Share your thoughts in the comments.