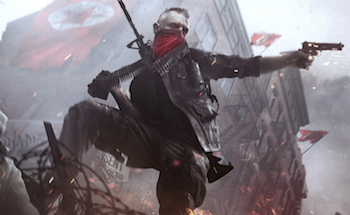 Tired of financial difficulties, Deep Silver finds a new home for its game.

Update: According to Kotaku, Crytek has experienced an exodus of its senior staff over the past week. Also, its American studio has been downsized, and its upcoming F2P co-op shooter Hunt: Horrors of the Gilded Age has been moved to its Frankfurt, Germany office.

Meanwhile, composer Graeme Norgate, along with many other ex-Crytek UK employees, has landed on his feet at the new studio. As he puts it, "Good bye Crytanic, hello Deep Silver Dambuster Studios!"

Original Story: It's been a tough time for developer Crytek. The story involves a high-ranking producer leaves, skipped paychecks, and bankruptcy rumors. Now, developer Deep Silver, apparently tired of waiting for Crytek to get their act together, has acquired all the rights and assets for the in-development Homefront: The Revolution, giving it instead to its newly-formed Dambuster Studio.

"We strongly believe in the potential of Homefront: The Revolution," said Deep Silver CEO Dr. Klemens Kundratitz, "and trust in the new team to continue the path they have been walking in the last years."

Woe seems to follow Homefront wherever it goes. The first game was originally developed by the ex-modder team Kaos Studios and published by THQ. After both entities went up in flames, the rights were purchased by Crytek for a paltry $500,000. Even better, the Homefront sequel was being handled by Crytek UK, which was composed of rescue-hires when Haze developer Free Radical went under in 2009. Already in dire financial straits, this cannot be good news for the ailing developer.

At this point, the history of this game seems to be a secession of shipwrecks, with each new rescue vessel sinking, one after another. Hopefully Dambuster doesn't follow suit.