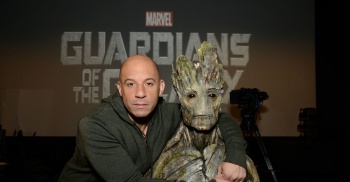 The Guardians of the Galaxy and Fast & Furious 7 star told Jimmy Fallon about his love for twenty-siders on The Tonight Show.

There's not a lot of Hollywood stars who proudly let their geek flag fly, but Vin Diesel is among them. Rumored to have run a Dungeons & Dragons game for the cast of Riddick , Diesel has played tabletop roleplaying games for over twenty years. He even penned the introduction to the D&D retrospective 30 Years of Adventure: A Celebration of Dungeons & Dragons. Talking to Jimmy Fallon on The Tonight Show, Diesel credited D&D with his becoming an actor. "I kind of became who I am because I played Dungeons & Dragons," says Diesel. "We acted! Every time we played, for the first couple hours we would just be talking, shooting the shit, and then, once we started getting into the game, everything changed!"

"I was lucky, because I grew up in artist's housing in the village, called Westbeth," says Diesel. "There were a whole bunch of out of work artists, and if you made more than $10,000 a year you were kicked out of the building. So all these children of artists were, you know, fantasy roleplayers and we started playing Dungeons & Dragons."

Diesel's next film has him playing Groot, a sentient alien tree, in Marvel's Guardians of the Galaxy, which opens August 1. Diesel is likely to return for the sequel, announced July 26 at San Diego Comic Con. Diesel also recently wrapped filming on Fast & Furious 7, which was delayed by the tragic death of co-star Paul Walker in car accident.