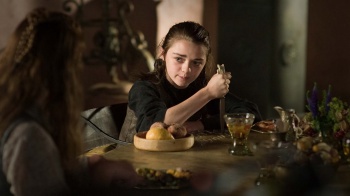 Maisie Williams, who plays Arya Stark in Game of Thrones, confirms that the cast know nothing when it comes to future events in the show, and opens up on how some book readers annoy her for feeling like they have a "claim" on the show for reading it first.

If you're a fan of HBO's Game of Thrones TV series, then chances are you have a friend (or two) that have read the books the show is based on. Not only that, but you probably have a friend who acts a bit annoying since he/she knows what's going to happen next and even give a point-by-point breakdown on why X scene is "wrong" since it's different from the books. Well, if you're annoyed at those people, you're not alone. Even Arya Stark herself is "sick" of these people who ruin it for everyone. Speaking to TV Line, Maisie Williams, who portrays Arya Stark in the hit show, speaks out on book snobs and how she likes it when the show deviates from the books so she can see book readers' reactions.

Bear in mind that Williams' answer is in response to a major scene missing in Season 4 that was in the books, which we won't spoil here.

That was a massive deal, but honestly, I really like it. I'm so sick of going on the internet and seeing all the book readers being snobby, spoiling it for other people, then saying, "Well, it's not a spoiler. The books have been out for years." Like, couldn't you just stop being mad for a second and let other people enjoy the show? They feel they have a claim on the series because they read the books first, and I understand that, but they don't need to be mean about it. That's why I liked moments like this, because book readers think they know what's coming, then we change it and it's really funny to watch their reactions. They're always like, "That's not what happened in the books, so the show's really bad now." But really, they just feel insecure because they're used to knowing what's coming next.

In the same interview, Williams confirms that cast members are left out in the dark when it comes to what's happening to show's plot, which is contrary to what most people think.

I haven't gotten the scripts yet, so I still don't know what's happening. I have a rough outline of what happens in the books, but you never know what they're going to put into this season versus next season, or what they're going to scrap altogether. I know a couple of really cool things happen in the books with Arya, and I just had a meeting about about a certain thing that happens to Arya, but I still don't know how it happens. And that's what it was like last year; I was learning fight scenes, even though I didn't know who I'd be fighting or why I'd be fighting them. People think the cast members know all the ins and outs, but we really don't.

In the latest Game of Thrones news, new Season 5 cast members have been announced during the show's TV panel at the San Diego Comic-Con. Odds on how long they'll live, though, haven't been divulged.

How do you deal with book readers who spoil the TV show's plot? If not them, then maybe those who act like anytime the show doesn't follow the book bit-by-bit is "wrong."