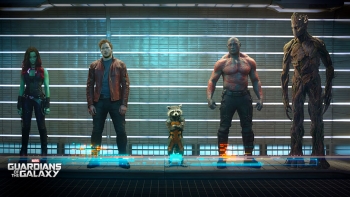 The first movie has only just hit theaters, and the director already has a lot of ideas on paper, telling fans "if I died tomorrow they could go make a movie.".

With a sequel already dated for July 28, 2017, it shouldn't be surprising that Guardians of the Galaxy director James Gunn has already been brainstorming up plans for his next foray into the Marvel Cinematic Universe. Speaking with website Film Divider, Gunn talked about what paths his characters could take in the follow-up and what story beats he'd like to further explore.

Suffice to say, the following could contain minor spoilers for the first movie, so read ahead at your peril.

Good to go? Then here's Gunn's words with Film Divider:

I know a lot of where I want to go. I have a lot of ideas for stories and characters that are going to appear, and there are documents written up, that some people have, about Peter Quill's father and his relationship, a lot of stuff about Yondu and a lot of stuff about Drax that nobody knows.

Considering the early positive buzz of the film, I'm sure plenty of you have your own ideas on what you'd like to see in a Guardians follow-up. Feel free to sound off in the comments about how you'd fell about more screen time for Drax, Yondu, Nebula, Papa Quill or anything else Guardians-related. And if you're still undecided on whether or not to see the film, check out Movie Bob's review.