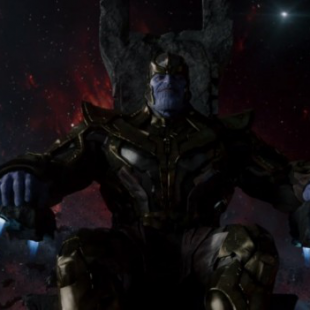 Marvel has released a still of Josh Brolin's Thanos showcasing his appearance in Guardians of the Galaxy.

With Guardians of the Galaxy now in theaters Marvel fans from near and far will likely be lining up to get their latest dose of comic book film adaptation goodness. And while the movie is apparently chalk full of nods and spectacle, it will also be giving Marvel fans a closer look at some of the universe's bigger villains.

Among them will be Thanos, who appeared briefly at the end of The Avengers and is now returning as something of a puppet master to the film's chief baddie Ronan the Accuser. Perhaps wanting to give fans a peek at him in advance (we would too if we'd snagged Josh Brolin to play him), Marvel has released a high resolution still of him from the film. The image in question shows the character sitting on his throne, looking ominous and maybe even just a little bit smug. The picture is similar to another leaked by a fan who attended an advance screening earlier this week.

Even with Thanos not being the primary villain of Guardians, we'd be lying if we were to say we were anything less than excited to see him being realized so fully on the big screen. What do you think? Does he look like you imagine he should? Is he close enough to the comics or even too close? And if you've seen Guardians of the Galaxy, what did you think of Josh Brolin's performance?