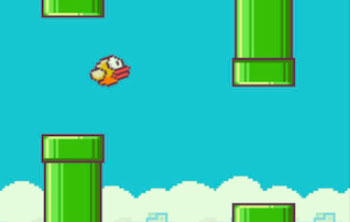 You heard right- Flappy Bird is back.

After Flappy Bird disappeared from App Stores last fall, the popular Flash game has made its return. Today, Dong Nguyen re-released the game via his .Gears studio exclusively on the Amazon Appstore for Android devices. This version includes several new features- including multiplayer mode, more obstacles, and ghosts.

The free game is playable on Amazon's new Kindle Fire TV and is compatible with its game controller. Players now press a button instead of tapping a touch screen to navigate the bird through the level. It is unclear how much longer the game will remain an Amazon exclusive before making the jump to Apple's Appstore and Google Play.

Nguyen, who is based in Hanoi, released Flappy Bird back in 2013 on iOS. He reportedly made tens of thousands of dollars from advertising revenue, and eventually pulled the game from the market after it became increasingly popular- claiming his decision was based on its "addictive nature". After that, the developer hid himself from the media- claiming that his newfound popularity caused him emotional distress.

"It happened to become an addictive product. I think it has become a problem," said Nguyen. "My life has not been as comfortable as I was before. I couldn't sleep."

The game's description reads, "Flappy Birds now are on Amazon Fire TV with incredible new features: Person vs Person mode, more obstacles, more fun and still very hard. Enjoy playing the game at home (not breaking your TV) with your family and friends."

It is unknown exactly when Flappy Bird will become available through other means of digital distribution.

Excited Flappy Bird is back? Express your emotions in the comments.