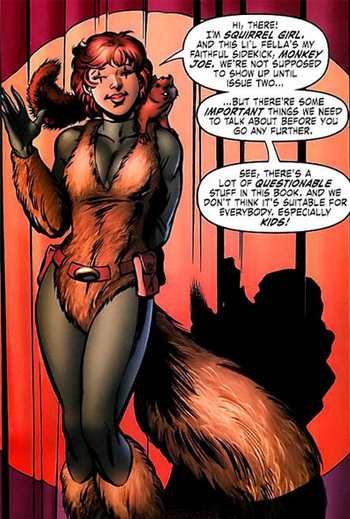 Marvel Studios is having a good weekend, with the once thought "risky" new franchise Guardians of The Galaxy debuting as a monster late-Summer hit. But if reports of a recent legal maneuver mean what some think they do, the studio may well have leaped ahead into full-on "showing off" mode: The studio has reportedly applied for a trademark for a fan-favorite character named Squirrel Girl.

Created by writer Will Murray and Spider-Man co-creator Steve Ditko in 1992, Squirrel Girl (real name: Doreen Green) is a young mutant gifted with superhuman strength, a bushy prehensile tail and other abilities like those of a common squirrel. She has also made use of retractable knuckle-spikes, a personal gyrocopter ("The Squirrel-A-Gig"), can communicate with actual squirrels and has had at least two of them (Monkey Joe and Tippy-Toe) as companion sidekicks.

Though intended as a one-off comedy-relief character who preposterously defeats Doctor Doom with help from a squirrel army in her first adventure, the character was found to be endearing by enough fans and writers to become a popular supporting player in the Marvel Universe. In recent years, she's frequently been portrayed as a kind of played-straight "Mary-Sue" figure, canonically defeating such Marvel heavy-hitters as Fin-Fang-Foom, MODOK, Baron Mordo, Korvac, Ego the Living Planet and even Thanos himself... off-panel. She has also defeated both Wolverine and Deadpool in hand-to-hand combat.

Trademark filings (Disney/Marvel already owns copyrights on its characters) have typically been undertaken by the publisher when the character in question is intended for use in one of its film or television ventures. Notably, Squirrel Girl's most prominent recent role in the Marvel Universe has been working as a babysitter for Luke Cage and Jessica Jones - both of whom will soon appear as part of Marvel's Netflix-exclusive Defenders multiseries.