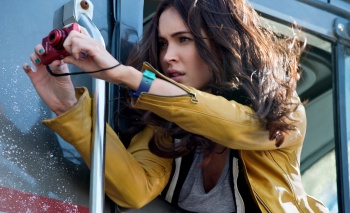 Don't like the new Teenage Mutant Ninja Turtles live-action movie? April O'Neil has a special message for you.

In case you didn't know, Megan Fox will be playing reporter April O'Neil in Michael Bay's live-action adaptation of Teenage Mutant Ninja Turtles. Now, if you're not warm to the idea of a new TMNT film, the actress has a rather straightforward message for you "haters," which she delivered in a Teenage Mutant Ninja Turtles press conference held on Friday in Los Angeles. The panel, which not only included Fox but also co-star Will Arnett, director Jonathan Liebesman and a number of writers and producers, was asked how they felt about some of the fans' backlash against the film. Fox responded by referencing the Michael Bay movie franchise that made her a household name and well, go read it for yourself.

Let me tell you something about those people. How much money did Transformers 4 make? Exactly. Those people can complain - they all go to the theater. They're gonna love it - and if they don't love it, they can fuck off, and that's the end of that.

Important to note that it's not only fans who have aired concern over the film, but even Teenage Mutant Ninja Turtles co-creator Peter Laird thinks that it shouldn't "fix what isn't broken." Not sure if he's lumped in with the "haters" Fox wants to fuck off, though. While Fox is busy wishing she'd star in a Sailor Moon action movie, you can check out our extended look at the new TMNT footage that was shown at the San Diego Comic-Con.

Regardless of Fox's crass outlook, do you think she has a point? Even if people complain, will they watch Teenage Mutant Ninja Turtles anyway once it hits theaters next week (August 8) just like they did for Transformers 4?