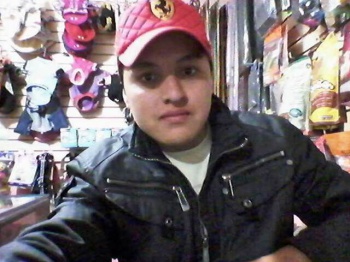 A young man in Mexico accidentally died after pointing a gun at himself while taking a selfie for Facebook.

In news that might sadden and frustrate you at the same time, a young man (pictured) in Mexico died after he accidentally shot himself while taking a Facebook selfie. Oscar Otero Aguilar, 21, of Mexico City, was mortally wounded when the gun he was pointing at his head accidentally discharged. Police state that Aguilar had borrowed the gun and was waving it around while trying to snap a photo. Aguilar's neighbor, Manfredo Paez Paez told local media: "I heard a gunshot, and then I heard somebody screaming and realized somebody had been hurt. I called the police and when they arrived they found that he was still alive."

The victim died in an ambulance on the way to the hospital. Previous selfies on Facebook by Aguilar showed him in front of fast cars, posing in a band and hugging beautiful women.

Ignoring the fact that private gun ownership is illegal in Mexico, why on earth would anyone want to take a selfie of themselves holding a real gun pointed to their heads is beyond me. Has social media morphed into such a big deal now that people are even doing dangerous things just to get noticed? Hopefully, this is an isolated incident and will prove to be an example that it's never a good idea to point a loaded gun at anything -- especially to yourself.