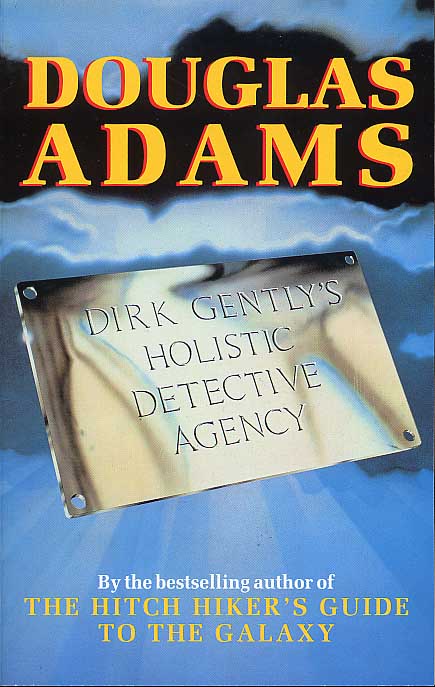 For many scifi fans, Douglas Adams' Hitchhiker's Guide to the Galaxy has long been considered required reading. This time around, though, it's the star of Adams' other scifi/fantasy series that's stealing the spotlight. Earlier today, IDW Entertainment and Ideate Media announced that they have jointly optioned the worldwide rights to the Dirk Gently novels, with plans to bring the "holistic detective" to television and comics.

First introduced in Adams' 1987 book, Dirk Gently's Holistic Detective Agency, and revisited in the 1988 sequel, The Long Dark Tea-Time of the Soul, Adams' titular character was best known for his belief in the "fundamental interconnectedness of all things" and his "depressingly accurate knack for making wild assumptions" (just don't call him "psychic"). Since that time, Dirk Gently has been brought to life in two BBC radio shows and again in a short-lived 2012 BBC television series.

To help bring Dirk Gently to a new audience, IDW and Ideate have tapped Chronicle writer, Max Landis, to script the pilot and to act as an Executive Producer for the series.

"Alongside the obvious yada yada I'm a lifelong fan, Long Dark Tea-Time of the Soul is one of the best books ever," said Landis. "This is any writer's ultimate project, and in the current TV space, it fits ridiculously well. Imagine a playground where you could come with any mystery, no matter how improbable, convoluted, or totally insane and then, simply by finding the right connections, you could tie it all down to one man, one private eye. If you're familiar with the property, you know: there's no freaking rules. Ancient gods? Sure. Larceny and petty crimes? Of course. Extra-dimensional aliens? I mean, probably; as long as you can make it funny, Dirk's on the case. This is a dream project of mine, no joke, and I absolutely positively couldn't be happier."

According to IDW, Dirk Gently won't just be setting up shop in the confines of television sets. The publisher also announced that it will be teaming with Ideate to bring the Gently's adventures to comic book fans as well, developing a new series of comics scheduled to debut in Spring 2015.