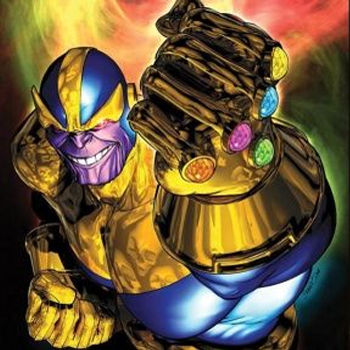 Though long expected by fans, it wasn't officially stated out loud until Thor: The Dark World that a few of the various all-important magical objects bouncing around the Marvel Cinematic Universe were in fact the movie versions of perennial Marvel Comics shiny-doodads called "Infinity Stones." In the comics the stones (six in total) all have names describing their uses, but in the films have been called by other names... but that was before Guardians of The Galaxy, which introduces cosmic-scale characters who actually know what the stones are.

Now, Guardians director James Gunn has confirmed via Twitter that the purple stone at the center of his film is meant to be the Power Stone. Along with Avengers' Tesseract (Space Stone) and Dark World's Aether (Reality Stone), this brings the number of Stones seen in the Cinematic Universe to three; with Soul, Time and Mind remaining (though many assume the Mind Stone will be revealed as the previously-seen power-source of Loki's mind-control scepter.)

First appearing (in comics) in the early 1970s and originally called "Soul Gems," the Stones began as magic objects wielded by magical/cosmic beings in multiple stories throughout the Marvel Universe. In the early 1990s, Marvel cosmic specialist Jim Starlin used them as the centerpieces of a multi-volume megastory in which they were collected by the supervillain Thanos and installed into a power-concentrated glove called The Infinity Gauntlet, after which they were typically referred to as "Infinity Stones." A version of the Gauntlet itself, lacking the stones, was glimpsed in the background of Odin's Vault in the original Thor.