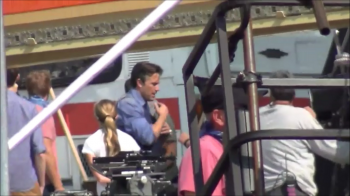 Spoiler alert! We've got new details on the background of Bruce Wayne -- and his bat-themed alter ego -- in Dawn of Justice.

We might have seen our first glimpse of Ben Affleck as Bruce Wayne in Batman v Superman in yesterday's video, but now we have more details on how the character will differ from Wayne in Christopher Nolan's Dark Knight trilogy. The details below haven't been verified by Warner Bros. Studios, but they do come from reputable source Badass Digest. Needless to say, the story elements shared below dive into spoiler warning territory, so bear that in mind before reading on.

If you watched the video, you probably noticed that Affleck's Bruce Wayne had a little greying at the temples? As it turns out, the Batman in Batman v Superman has been fighting crime for close to thirty years, which would put Bruce Wayne in his 50s. It's been said that this version of Batman is "an urban legend, a creature of the night, and no one has ever taken his picture." Even if they haven't been documented in the film, Affleck's Batman has seen plenty of action, and the Batcave even includes a memorial centered around a tattered Robin costume -- though it hasn't been revealed which iteration of the Boy Wonder this is. Additionally, this version of Batman is a "quieter operator, not involved in blockbuster battles but in all sorts of badass vigilantism," which is in stark contrast to Christian Bale's gravely-voiced Bats. Another tidbit from the same report claims that Wonder Woman (played by Gal Gadot) has "also been in operation" for some time before Batman v Superman begins -- her activities have just been as secretive as the Batman, though they're "badass" in a "very different and unexpected way."

In related news, DC and Warner have moved the release date of Batman v Superman: Dawn of Justice to March instead of May, presumably so it won't have to compete with Captain America 3 at the box office.

What do you think of a 50-year old Batman taking on Superman? Is it mimicking Frank Miller's The Dark Knight Returns formula a bit much or is Warner going at it the right way?