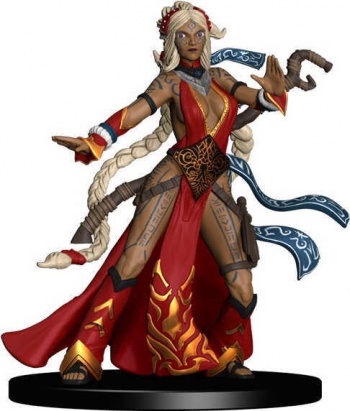 Paizo has offered a preview of the miniatures it will be releasing for Pathfinder in the future.

Starting January 2015, Paizo will release an Iconic Heroes Boxed Set every month. Each set will include five iconic Pathfinder heroes miniatures and one suitable companion creature. As a bonus, each box will also include a unique Pathfinder Adventure Card Game card associated with each figure in the box - cards that you won't be able to find anywhere else.

Each Iconic Hero Boxed Set will retail for $29.99 and feature miniatures with a "premium" paint job. Any hero released in these new box sets that has already appeared in a previous set will come with a completely original sculpt.

Paizo has offered a preview of the miniatures that will feature in the first boxed set; check them out, below.

Future sets will eventually include every single iconic character Paizo has done to date, including all the classes from the Advanced Class Guide.

I love the artwork of Wayne Reynolds; seeing it depicted in a 3D sculpt is... interesting. Note that the images in the gallery are 3D renders, rather than actual photographs of painted minis, so expect the real minis to look better.