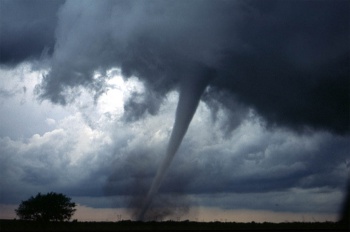 Global warming may be responsible for the increasing rate at which tornadoes are arriving in waves.

Recent examples of extreme weather - and other phenomena, such as giant mystery holes - are often pointed to as the effects of climate change, and it seems twisters may be a new threat on that list. According to new research based on an analasys of US weather records, global warming may be causing an increase in the rate at which tornadoes arrive in clusters.

"Although the climate does not appear to be making tornadoes more frequent, when they come, they come in bunches," says James Elsner of Florida State University in Tallahassee, who examined 60 years of tornado statistics. "So you'll see fewer days in which you're threatened by tornadoes, but when you are, the threat will be greater."

"Elsner's analysis reaches the same conclusion as mine," says Harold Brooks of the National Severe Storms Laboratory in Norman, Oklahoma. In 2012, he presented an analysis that showed that over the past 30 years, the average number of tornadoes per year has remained consistent, but the average number of days during which a tornado occurs has decreased. In other words, the tornadoes are showing an increasing tend to cluster.

"We've seen increasing variability in tornado occurrence over the past 10 to 20 years, but the question is whether it's associated with warming," says Brooks.

According to Elsner, the link to climate change makes sense. Tornadoes require a mix of cold and warm air, and global warming is making cold air scarcer. Because of this, the tornadoes occur more rarely - but when they do occur, the extra heat creates ideal conditions for tornadoes to proliferate.

"When you do have cold air aloft, the atmosphere goes crazy," says Elsner.