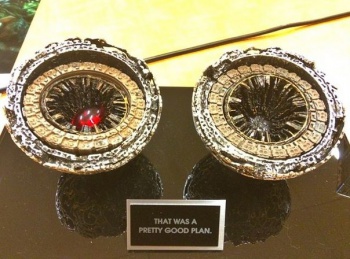 For his 44th birthday, Marvel gave Guardians of the Galaxy director James Gunn, his own Infinity Stone.

Just in case you're wondering, the Infinity Stone shown off in Guardians isn't the first one to be shown in a Marvel movie. In 2011's Captain America: The First Avenger, the Tesseract was shown off, which is said to house the "space" stone. In Thor: The Dark World, The Aether was revealed which is said to be based on the "reality" stone. Finally, in Guardians of the Galaxy, hidden within the orb that everyone's fighting for, is the "power" stone. So, that leaves us with three more stones uncovered (time, soul, mind). It's been discussed by fans that Loki's staff houses the "mind" stone given its power to control people's minds, but Marvel has yet to confirm this to date. Regardless if we're down to two stones or three,you can bet that they'll appear in some Marvel movie at some point since the stones play a big role in Marvel's Cinematic Universe.

For more Marvel news, actor Josh Brolin confirmed that he's set to appear in at least three more Marvel movies as Thanos. And in case you're wondering what Marvel has planned for that Avengers and Guardians team-up, go check out what Marvel Studios boss Kevin Feige had to say about it.

Which Marvel movies do you see the other stones making an appearance? And will Marvel be able to pull off the Infinity Gauntlet story without killing every superhero involved?