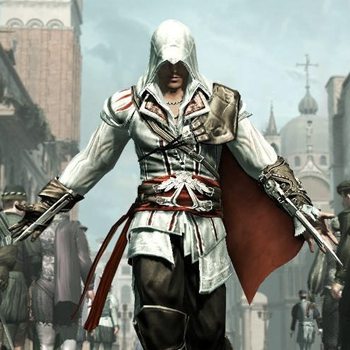 Busy actor Michael Fassbender has been set to star in a live-action film adaptation of the Assassin's Creed video game series for years now, but it's never been publicly clarified what the film will actually entail as the AC series follows multiple protagonists across varying time periods. Now, movie news site Film Divider is claiming to have the answers.

According to the report by Patrick Dane, Fassbender's Assassin will be a new character named Aguilar de Agarorobo, and the story will take place primarily during the Spanish Inquisition and involve real-life historical figure Torquemada as its main villain. As in the games (which are based around a device called The Animus which allow a user/subject to leap into the virtual mind of their genetic ancestors) Fassbender will also portray Aguilar's present-day descendant, a Death Row inmate named Michael Lynch, being experimented on by the evil Abstergo Corporation. The report also mentions game villain Alan Rikkin playing a key role, and Michael (and possibly also Aguilar?) being aided by a female Assassin named Lara.

The film is currently set for release in August of 2015, with Justin Kurzel directing. The report does not cite a source, and the studio has not commented.