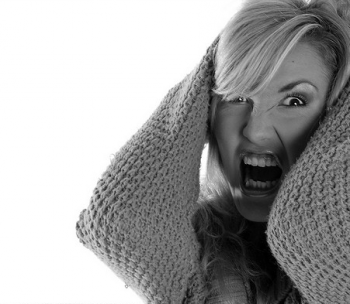 Premenstrual syndrome may have evolved in humans as a means for women to decouple from infertile men in order to better survive as a species.

PMS is something of a sensitive issue, but Professor of Molecular Evolution Michael Gillings was brave enough to put forth the idea that premenstrual syndrome is actually a beneficial evolutionary adaptation. According to Gillings, a woman experiencing PMS symptoms leads to an increased chance of a breakup, and historically, a woman in a "bad" relationship would experience PMS much more than other women. "Bad" isn't the term Gillings used; he calls them infertile relationships - which, from an evolutionary standpoint, are bad.

"In the past, women had many fewer menstrual cycles than women in modern societies, because they did not have control over reproduction and were either pregnant or breastfeeding most of the time," said Gillings.

"Imagine that a woman was pair bonded with a sterile or infertile male. Then, even in the past, they would have had regular cycles. If women in these relationships exhibited PMS and this increased the likelihood of the pair bond dissolving, this would be a huge reproductive advantage.

"This simple phenomenon might explain the frequency of PMS," said Gillings. "There are various lines of evidence from DNA and behavioral studies that confirm this idea."

Of course, while this may have historically been a beneficial adaptation, society has come a long way. In many nations, women now have the freedom to become pregnant on their own terms, making such an adaptation unnecessary.

"Under this view, the prevalence of PMS might result from genes and behaviors that are adaptive in some societies, but are potentially less appropriate in modern cultures," said Gillings.

"Understanding this might help the management of PMS and will help change attitudes, for example, towards cycle-stopping contraception. PMS is a simple and natural behavior that arose as a consequence of our evolutionary past."

What do you think? Do you think PMS could have been an evolutionary adaptation?

Escapist Podcast - Tabletop: 020: Can You Make the Best Critters to Survive Evolution? The Escapist Staff 1 Comment
Comments on