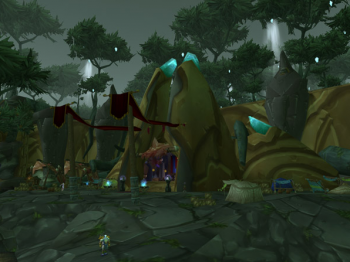 "Because of his presence within our community," asks the petition, "We the players of World of Warcraft are asking Blizzard to kindly create an NPC within the game that memorializes the actor/comedian."

Update: Three potential Robin Williams NPCs have been spotted. The character appears courtesy of Warlords of Draenor and he hasn't yet shown up, but there are three potential versions: a Djinn (Aladdin), a human female (Mrs Doubtfire) and a human male (Mork?).

Don't get too excited by those sound files; they're just the standard emotes, and presumably will be replaced by something else. There's no telling where these NPCs will appear, or even if all three will, but it's great that Blizzard is moving so quickly to commemorate Williams.

Original Story: In less than 24 hours, a petition to create a Robin Williams tribute character within World of Warcraft gathered more than 11,000 signatures, and Blizzard has said it is taking care of it. The Blizzard response comes from Technical Game Designer, Chadd Nervigg, and while we don't know exactly how Blizzard intends to come through, the fans have been asking for a permanent tribute character performing at World's End Tavern, delivering some of Williams' best material.

Williams was a hardcore gamer who loved playing World of Warcraft, but preferred to keep his online identity secret. It's said he used to play the Mannororth server - "and was something of a troll in trade on good days," remembers petitioner Jacob Holgate - building his own overclocked system to get the most out of his PC gaming.

"It is with a growing sense of pride for the World of Warcraft community that I declare victory for this petition," writes Holgate. "In less than twenty four hours we've earned eleven thousand signatures, a huge amount of traction on many gaming and new outlets, as well as assurance from Blizzard employees that our desire for a Robin Williams tribute and or NPC will be handled with great care."

Though Williams was a Warcraft fan, that wasn't his only gaming pleasure by any means. He used to enjoy pen-and-paper tabletop, and segued from that into RPGs like Wizardry and the Zelda series. He was a huge fan of shooters, particularly Half Life and Call of Duty, and was enraptured by Portal. Though a tabletop fan with a multitude of Warhammer 40K armies, he never got to play any of them.

Here's hoping the petitioners get exactly what they're after, and a certain comedian appears at the World's End very soon.