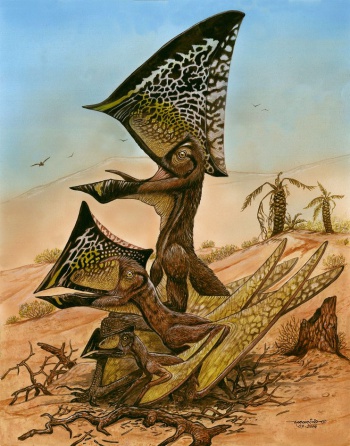 The discovery of forty seven skeletons of the flying reptiles gives paleontologists new insights into how these dinosaur-era animals lived.

On the outskirts of Cruzeiro do Oeste in southern Brazil, paleontologists have uncovered the bones of almost fifty pterosaurs, large flying reptiles that lived alongside dinosaurs. The pterosaurs are a new species with a large bony crest on their heads, a feature not seen in other pterosaur species. Pterosaurs, sometimes called pterodactyls, are the earliest known flying vertebrates, animals that have backbones. The newly excavated discovery is a huge group of adults and juveniles, giving paleontologists a unique chance to chart pterosaur growth. The younger pterosaurs look like miniature versions of the adults, suggesting that they could fly from an early age. The forty seven specimens uncovered are just the first fossils from this site, and hundreds more could still be waiting to be discovered.

The skeletons belong to a new species, Caiuajara dobruskii, named in honor of Alexandre Dobruski and his son, João Dobruski, who together first discovered fossils at the site in 1971. The article, published August 13 in the journal PLOS ONE, describes the results of the first excavation at the site. The site is a rare find because it preserves, in three dimensions, a large group of pterosaur bones of the same species. Most pterosaur discoveries have been of individuals, not groups. Differences in the skulls and leg bones suggest that many of the specimens are juvenile pterosaurs or young adults. The smallest of the specimens had a wingspan of just 2.1 feet, while the adults have a wingspan of up to 7.7 feet. Only two skulls believed to be adult pterosaurs have been recovered, but all of the skulls show the bony head crest. The head crest is smaller and less pronounced on the juveniles. The study authors speculate that the pterosaurs may have lived in a colony around an inland lake, with the population living there over generations. The arrangement of the bones suggests that the pterosaurs at the site died over an extended period of time, not in a single catastrophic event.

The study is the strongest evidence yet that pterosaurs were social reptiles that lived in groups. Though this site only includes one species, the evidence gathered can be used to support existing theories that other species of pterosaurs were also social animals, living in flocks like flamingos. Another significant pterosaur find, the oldest known species, was discovered in China and published in April 2014.