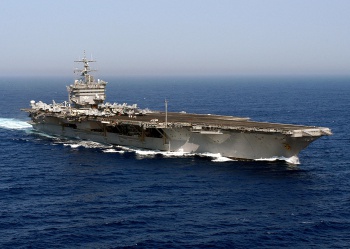 The USS Enterprise US Navy aircraft carrier has been undergoing decommissioning since 2012. Once this "inactivation" is completed, the vessel will be scrapped in 2015.

While Star Trek's USS Enterprise will likely remain the most famous vessel by that name, there's a real ship that deserves that recognition. The USS Enterprise is the world's first nuclear-powered aircraft carrier, and at 1,123 feet in length, she is the longest naval ship in the world.

In service since 1962, the USS Enterprise has been undergoing decommissioning since 2013. She served for 51 consecutive years - longer than any other US aircraft carrier. Her final deployment ended November 2012.

One of the veteran shipbuilders that got to escort the Enterprise on her goodbye voyage was Rodger Morefield, who speaks of her like only a shipbuilder could.

"She's the only girlfriend I'm allowed to have, I'll put it that way," Morefield said. "She has been high maintenance, but she has been worth it."

Now, her "inactivation" has nearly completed. The Navy has never permanently shut down a nuclear-powered aircraft carrier before, and it has cost $745 million to do it. In January 2015, the Enterprise will be towed from its current location - Pier 2 at Newport News Shipbuilding - to Dry Dock 11 in Washington, where she will be dismantled and recycled.

"Serving on Enterprise was almost a badge of honor among those who were nuclear trained," said Rear Admiral Thomas Moore, the Navy's program executive officer of aircraft carriers. "If you didn't serve on Enterprise, you really haven't lived."

"This is something nobody wants to do, but it has to be done," said Captain William C. Hamilton Jr., commander of the Enterprise. "So let's have people who love the ship do it. That's the dignity of it."

Another ship will carry on the legacy of the name: the third Gerald R. Ford-class aircraft carrier, construction of which is years away. The current Enterprise was the eighth vessel to bear the name, and her predecessor was the most decorated warship in US history.