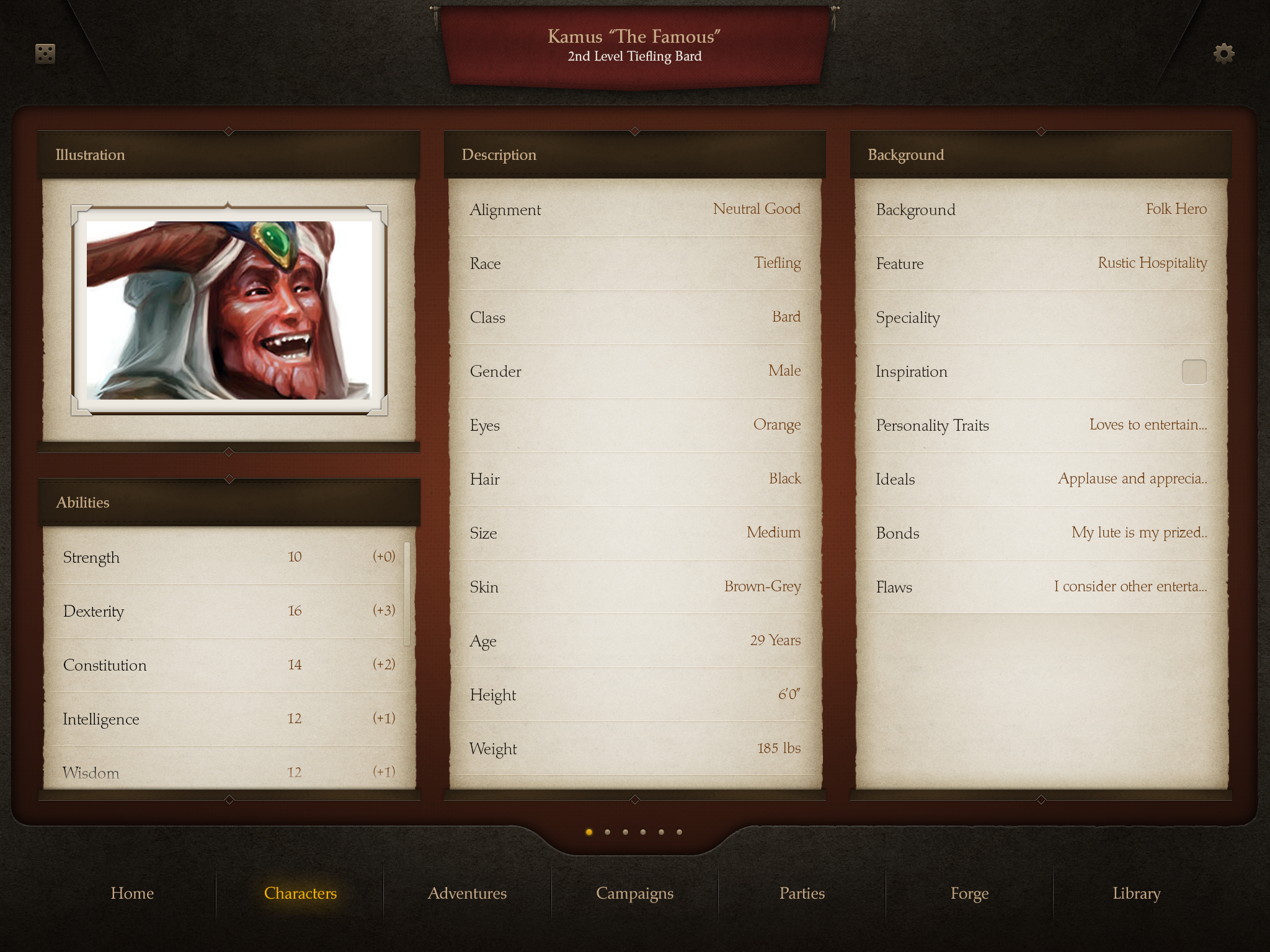 Trapdoor Technologies is very close to making the first true digital Dungeons & Dragons experience, with the help of Wizards of the Coast.

Dungeons & Dragons has a history with digital companions that's at times more frustrating than not - half fulfilled potential and disappointing functionality leading to an at-times frustrating experience trying to integrate tech into the game table. Trapdoor Technologies is trying to change that with D&D DungeonScape, their companion app to the brand new 5th Edition of D&D. "We wanted it to be no more intrusive than a character sheet," said Chris Matney, the managing director for Trapdoor. At the same time, they wanted the app to "eliminate that 45 minutes of looking at rulebooks that's eating up your gaming time," he said. In a hands on session with the latest version of DungeonScape at Gen Con, I saw that Trapdoor is closer to making a functional digital D&D than anyone before them.

It wasn't easy, though. Matney and his developers had to be constantly aware of when their electronic experience was taking away from what makes D&D fun: Social experience. After a few hours with the app, though, I was well pleased. The basic functions like the character creation and character sheet are a blast to play with, and the automated functions at the heart of the app actually speed up, rather than roadblock, the experience at the table. That's the part that was tricky for the Trapdoor team, who would sometimes implement a feature and realize it was a bad call. "We would put something in and say, oh, I've just automated the fun out of this," said Matney.

The app itself is straightforward, with a homescreen that tells you the latest official D&D news and app updates. It's got tabs for characters, adventures, campaigns, parties, a creation called forge, and a library of D&D game rules. Of all that, the character sheets and creation was the most fully implemented in the demo I touched. Creating a character was a breeze, with successive screens giving you races, classes, and backgrounds to choose from, all decorated with lovely art from the game books. As you tap around, the relevant sections of content from the Player's Handbook simply pop up. No idea what a spell does? Tap it. Don't know the Armor Class adjustment for a breastplate? Tap it. Confused about the rules halfway through? Pull up a search bar and see exactly how bonus actions work in moments. That easy accessibility was the killer feature, what would have taken twenty or thirty minutes of writing and rulebook searching instead took moments of swiping and typing. If that's too much for you, Trapdoor is making a beginner-friendly quiz version of character creation. Answer a few questions and it'll spit out an iconic character that fit's your playstyle. 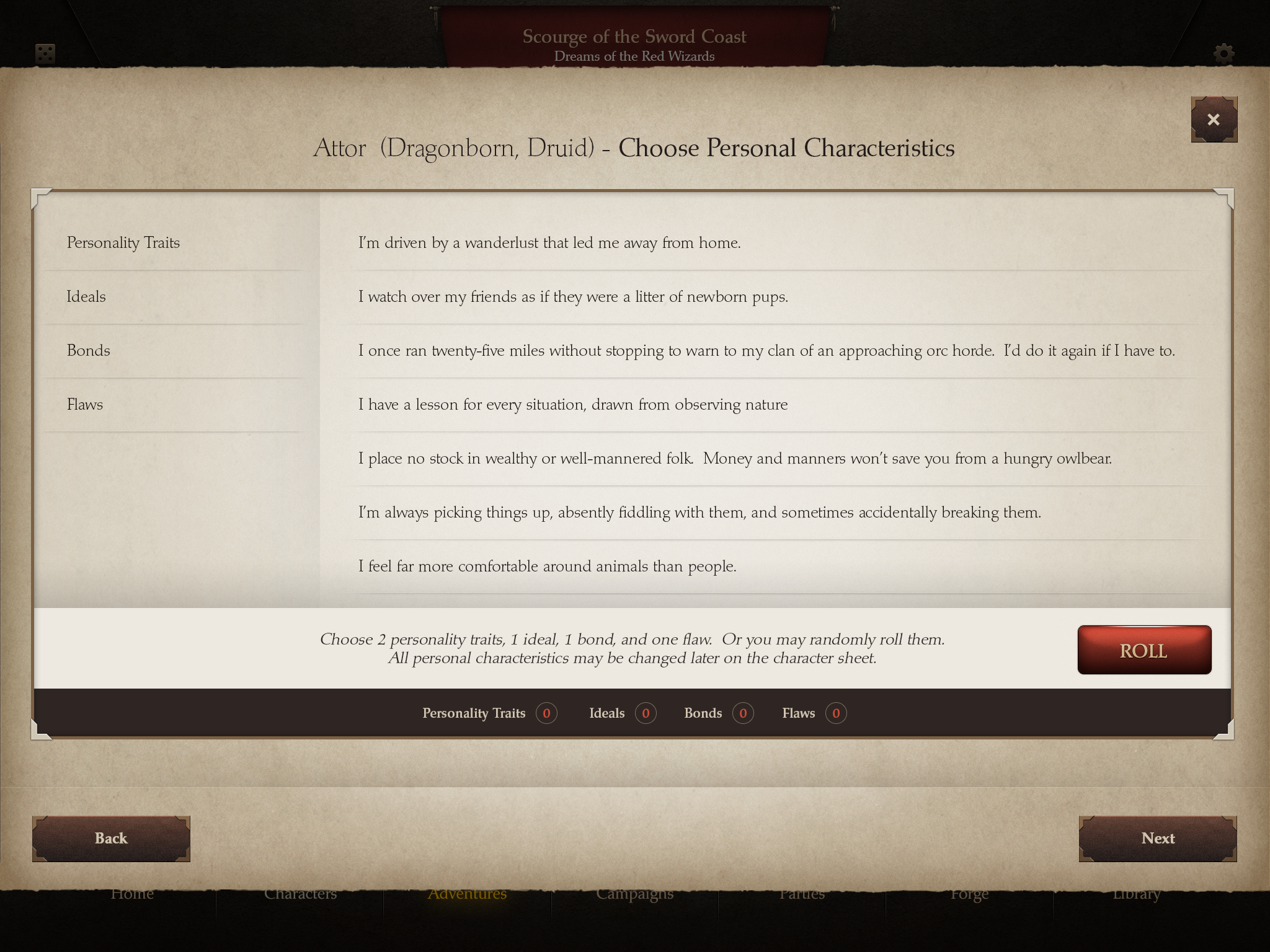 As the character creation finished, the game dropped you into a digital character sheet made up of information filled boxes. Swiping across several screens saw large boxes that were filled with numbers fully generated and ready to go - from skills to attacks and spells. If you pulled out from that view you were able to position the boxes in any way you wanted, allowing a customizable character sheet. For example, I grouped all my attacks, spells, and abilities on one page so I could quickly do any combat, and my abilities, skills, saving throws, and vital stats like HP and AC on the next page - so I could pull those at a moment's notice or a have a good base screen for roleplaying. Another page housed my game notes and my character's traits, flaws, and bonds. I chose to play a melee combat focused Wizard, so that I could really pull at the most complex character available, and the system handled it with aplomb. In play, it was like having every rule I needed at my fingertips in moments.

From the dungeon master's end of the table, DungeonScape promises to be profoundly useful. The full text of published D&D adventures will be available, but it's not just that - it's fully integrated. Tapping on an important NPC's name pulled up game art of the character, allowing the DM to show it immediately to the players. Same with maps, which got pulled up as soon as they were needed. Hyperlinked game sections moved the DM effortlessly from area to area in a dungeon or town. When a combat came up, an initiative and hit point tracker for not just the monsters, but the players, could be pulled out over the adventure. Tapping on a monster in that view pulled up the creature's full statistics without leaving the tracker, allowing you to maximize or minimize any stats at a moment's notice. That function is networked to the players' copies of DungeonScape, if they're using it, so that individuals could roll initiative and push it immediately to the DM.

In the future, Trapdoor will be implementing a "Forge" function that allows creators to make their own adventures and have them work precisely like official modules. Matney hopes that the community will quickly share their creations with each other, and hinted at hopes for a process to convert community content into premium official D&D work. They'll also be making tutorial videos, allowing people to learn easy. They're going to release in three stages: A player's release very soon, a DM's components release after that, and a creator's release by the end of the year - at which time DungeonScape will be 'complete' and new features will start getting worked on. The various D&D books will be available on DungeonScape as soon as they release in flesh, and they'll get errata updated to them within hours of that being available. Neither Trapdoor nor Wizards was ready to discuss pricing on DungeonScape, but after the experience I had with the software it'd have to be a pretty steep price to scare me off.