New images reportedly of the Stormtrooper and "Jungle Trooper" helmets have surfaced online. Is this what the Imperial Forces will look like in Star Wars: Episode VII? 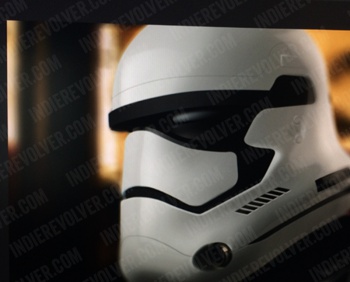 Website Indie Revolver has recently posted "very reliable information" that show what appear to be the new Stormtrooper helmets for Star Wars: Episode VII. As you can see, the helmets are a bit more streamlined from the previous incarnations, and, as pointed out by Indie Revolver, the helmet is asymmetrical with a single breather/vent on the bottom, left side of the helmet. The black "mouth" area underneath the white plating also appears to be a cloth mesh. Another slotted vent appears on top of the helmet's dome.

A second image was also posted, which some have dubbed the "Jungle Trooper" helmet, though Indie Revolver sees more in common with the Snow Trooper line of gear from Empire Strikes Back. This helmet has a single, thin horizontal eyepiece and what appears to be a removable face mask.

Later, a member of forum site RPF, used by movie fans dedicated to making prop and costume replicas, posted what he said was an image of a Stormtrooper helmet from an insider friend, who allowed him to leak it after the Indie Revolver story. Assuming the picture is true, it gives credibility to the new images.

What do you think of the new look? Is this what you want the next generation of Stormtroopers to look like, or was the old look best left alone?

And if you're interested in more Star Wars news, you can check out a Man at Arms video where a katana/lightsaber hybrid is created, or, for the skeptics, our list of ways J.J. Abrams could still mess up Star Wars.