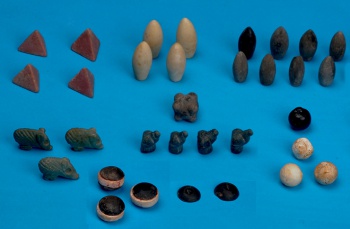 The oldest gaming tokens ever found have been discovered in Turkey and dated back to the early Bronze Age.

For some people, they appear to be simple stone carvings. But for tabletop gamers - and the Turkish archaeologists who found the stones - they are gaming tokens. Unearthed in an early Bronze Age burial site at Başur Höyük, a 820- by 492-foot mound near Siirt in southeast Turkey, the pieces consist of 49 small stones sculpted in different shapes and painted in various colors.

"Some depict pigs, dogs and pyramids, others feature round and bullet shapes. We also found dice as well as three circular tokens made of white shell and topped with a black round stone," said Haluk Sağlamtimur of Ege University in İzmir, Turkey.

Sağlamtimur says that similar pieces were found at sites in Syria and Iraq, but those were found as single objects and believed to be counting stones.

"On the contrary, our gaming pieces were found all together in the same cluster," he said. "It's a unique finding, a rather complete set of a chess like game. We are puzzling over its strategy."

Radio carbon dating traced the pieces back to 3100-2900 B.C., but there is no scientific method to determine the rules of this ancient game.

"According to the distribution, shape and numbers of the stone pieces, it appears that the game is based on the number four," said Sağlamtimur.

In the following gallery, you'll see the gaming stones and other objects found buried with them, along with the dig site at which they were recovered. Also pictured is a gaming board independently found in the Royal cemetery of Ur, associated with the "Game of Twenty Squares," which was played around 3000 B.C.

I see four tetrahedrons, a few carvings of monstrous creatures, what are arguably worn icosahedrons... Clearly, these are gaming pieces for the world's first tabletop RPG and miniatures set. Turns out that Gygax* guy was just a hack.

*Gary Gygax was the co-creator of Dungeons & Dragons and has been described as the "father of D&D." We are immensely grateful for his pioneering of the tabletop RPG.