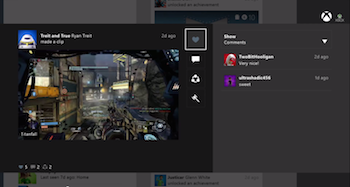 Microsoft has infused the Xbox One with numerous new features through a software update now available for download.

The latest monthly update for Microsoft's Xbox One went live late last night, and brings new features to the console that are aimed at making player's experiences easier to enjoy and more social. Users should be prompted to download the software when they turn on or restart their boxes.

The new features included in the August update are ones previously requested by players and are meant to give the Xbox One a competitive edge against Sony's PlayStation 4. A major addition is the ability of mobile purchasing, which has been offered in PlayStation's app since its launch. Players can now use their phones to purchase games through either Xbox SmartGlass or just Xbox.com. When a game is purchased, the mobile app will turn on its designated console automatically and begin the download, making it ideal for people while away from their home or on the go.

Another addition is the inclusion of 3D Blu-ray playback- another feature that was only provided by PlayStation 4 until now. Xbox One's activity feed has also seen some upgrades, such as aesthetically friendly interface and the ability to share, like, and even text posts. Other minor new features include low-battery notifications for controllers, complete notification disablement during video playback, and exact times for when members of a player's friends list were last seen online.

Xbox's Larry "Major Nelson" Hyrb posted a video last night to coincide with the August update that gives a more detailed look at all its new features.

Own an Xbox One? Tell us what you think of the update in the comments.