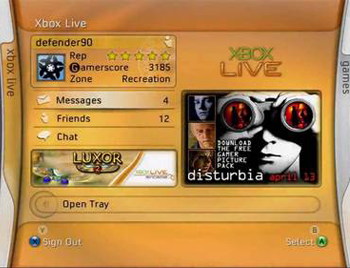 Ex-Microsoft employee apologizes for creating the initiative to have ads on the Microsoft dashboard.

"If you hate seeing advertisements when you boot up your Xbox, let me apologize in advance," states Allen Murray, the ex-Microsoft program manager, "I am one of the people--if not THE person--responsible for ads on the Xbox."

In a blog post addressed to the Xbox nation, Murray explains how he came to work for Microsoft from Amazon, and how he had to push to get ads on Microsoft's interface in the first place.

When Murray joined Xbox's team in 2004, he worked on platform software and realized he could "quickly make an impact, for better or worse." While learning about the new projects Microsoft was working on, one of which was the Xbox Live Arcade, Murray realized how difficult it was for users to find new game content. Hexic, for instance, was a puzzle game you can only play on the Xbox 360 at the time and was at risk of being buried because there was no way to advertise it on the dashboard--and Murray previously worked with the game's developer Jason Keimig so he had a personal attachment to the cause.

Murray then went to Larry Hyrb, a.k.a. Major Nelson, with the issue. Hyrb supported the initiative and with his help Murray was able to bring the case to his boss.

"So, as you can see we have all of these great games but no way for players to easily find them. So I'm proposing that we display banner ads on the dashboard that link directly to the download pages of the games so that..."

"Sort of, but these aren't like ads for Mt. Dew or anything, these are just..."

"How will they know they can download Zuma on the day it launches?"

Microsoft was still uneasy with the notion, and Murray speculates it was due to his terminology of "advertising" and "banner ads." In any case, Hyrb was able to push the project forward and the "Banner Of The Day (BOTD)" system was implemented. Flash-forward ten years and, "Nowadays the Xbox One UI is nearly all 'ads'... So it's nice to see that the idea caught on and if you hate the Mt. Dew ads, I am truly sorry. "

Murray mentions his next project at Xbox was designing the 360's parental controls. He apologizes for that as well.