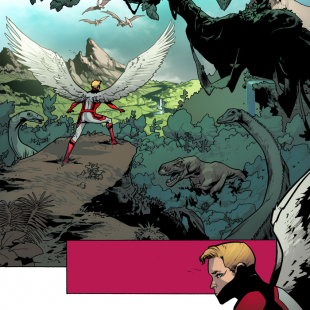 Marvel has announced a new storyline that see the time travelling heroes of All New X-Men "scattered across the Ultimate Universe."

With a few exceptions Marvel has kept its 616 and Ultimate universes relatively separate from one another. They've obviously had some parallel's, to be sure, but the progression of their worlds and the overarching plots have remained largely (and often mercifully separate). Come September however, the two universes will again be crossing paths again as writer Brian Michael Bendis sends the cast of All New X-Men on a universe hopping trip into the Ultimate Universe.

In a new plotline hinted at in issue 31 of All New X-Men and formally revealed today in a press release from Marvel, the time-displaced X-Men (Jean Grey, Iceman, Beast and Angel) will be "scattered across the Ultimate Universe" where they'll have to "find their way back to each other if they [want to] have any hope of finding their way back home!" Being the Ultimate line's most popular character, Miles Morales (a.k.a. The Ultimate Spider-Man) will, of course, be making an appearance, as will "some of the Ultimate Universe's heaviest hitting villains."

Setting aside the fact that it'd be nice for Marvel's various X-Men books to step away from time travel and "dimension hopping" for five minutes, I do have to admit that this storyline has me a bit intrigued. After all, it's already been indicated in the past that there will be consequences if the time travelling heroes of All New X-Men cease to exist in the present day 616 universe. While they'll still technically be alive, one has to wonder if their moving to another plane of existence will have any negative effects on their home universe. We'll have to wait until September to find out, but I can personally say I'll be eager to read it.