At a packed party during the height of Gen Con 2014, the annual Gen Con EN World RPG Awards - commonly called the ENnies - were presented to cheers and applause. The ENnies, an award accorded by the popular vote of the roleplaying public, have been going for quite a few years now. The biggest winners were companies Paizo, of the Pathfinder Roleplaying Game, Evil Hat Productions, publishers of Fate Core, and Monte Cook Games, publishers of Numenera. Publishers, writers, artists, and designers alike were alternately struck speechless or gushed about the honor that the community had chosen them for. Most notably a wonderful acceptance by veteran game designer Monte Cook for Numenera's "Best Product" win. Cook, who you'd think would be ready for this by now, seemed almost at a loss for words in heaping praise on those in the company who'd helped him see his vision out to reality.

Evil Hat Productions racked up an almost comical number of honors too, taking a silver or gold award in nearly every category they were nominated for. Paizo's suite of Pathfinder products had clear fan favor, especially when it came to art direction. Unsurprising, given Paizo's exceptionally pretty books. This year's ENnies were also graced by an exceptionally heartwarming marriage proposal. D'aww.

The ENnie award nominees are decided by a panel of judges, then voted on for final victories by the gaming public. They take place each year as a collaboration between Gen Con and the website EN World.

Without further ado, here's the winners as given by the ENnies themselves. 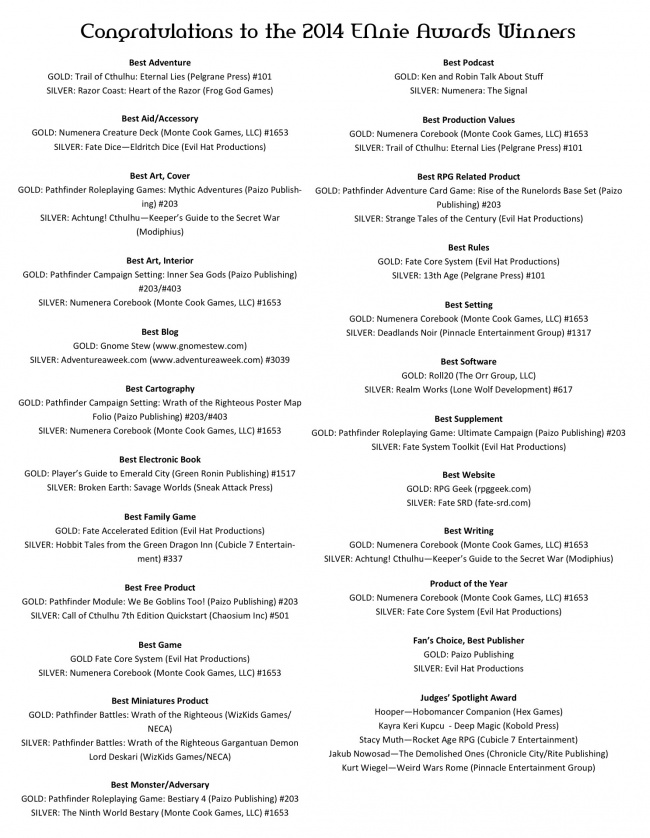