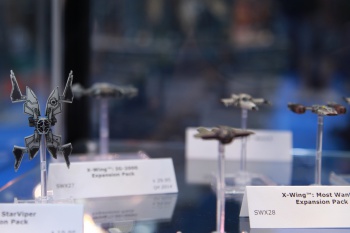 At Gen Con, Fantasy Flight Games announced that Wave VI of X-Wing Miniatures Game ships will add a third faction to the previously two-sided game: Scum and Villainy. Drawing on a corps of bounty hunters, criminals, hutts, and worse, these ships will add representation for the minor characters of the Star Wars universe. In addition to new unique ships, scum and villains will gain unique new type of upgrade: Illegal technology. The villains will be primarily introduced by the Most Wanted expansion pack, which will include a few ships and cards for past ships giving them all manner of new abilities themed to the scummy, evil pilots now inhabiting them. The various scum ships are slated to show up alongside the rest of X-Wing Wave VI in Quarter 4 of 2014.

Alongside existing ships, the scum will be able to claim a few new ships as entirely their own. The StarViper will be a quick, vicious attack ship with powerful maneuverability at a premium price. The M3-A interceptor will be a blisteringly fast and cheap attack platform. The IG-2000 will introduce robot bounty hunter cum assassin droid IG-88 to the game, and will be both very expensive in points and very deadly, possessing a unique maneuver only a few pilots can pull off to date. Further, as a droid ship, the IG-2000 will be able to network with other ships of its type to share information and pilot skills. As you might expect, the previous Firespray-31 expansion that added Boba Fett's Slave-I can be fielded by the scum as well as its previous exclusive masters, the Imperials. No word yet on whether any of the scum ships will show up in other lists.

It's unlikely that this will be the last we hear out of Fantasy Flight for X-Wing Miniatures, as it's their most successful game ever. "We see both seven year old kids and hardcore competitive players on this game," said Steve Horvath, a Senior Vice President at Fantasy Flight, "so that's when we knew we had a hit on our hands. We love this game."

You can check out more info on their official announcement page.

Curious about X-Wing Miniatures? You can read our official review here.

If you like Star Wars and spaceships, Fantasy Flight was also showing off the larger scale game Star Wars: Armada at Gen Con.